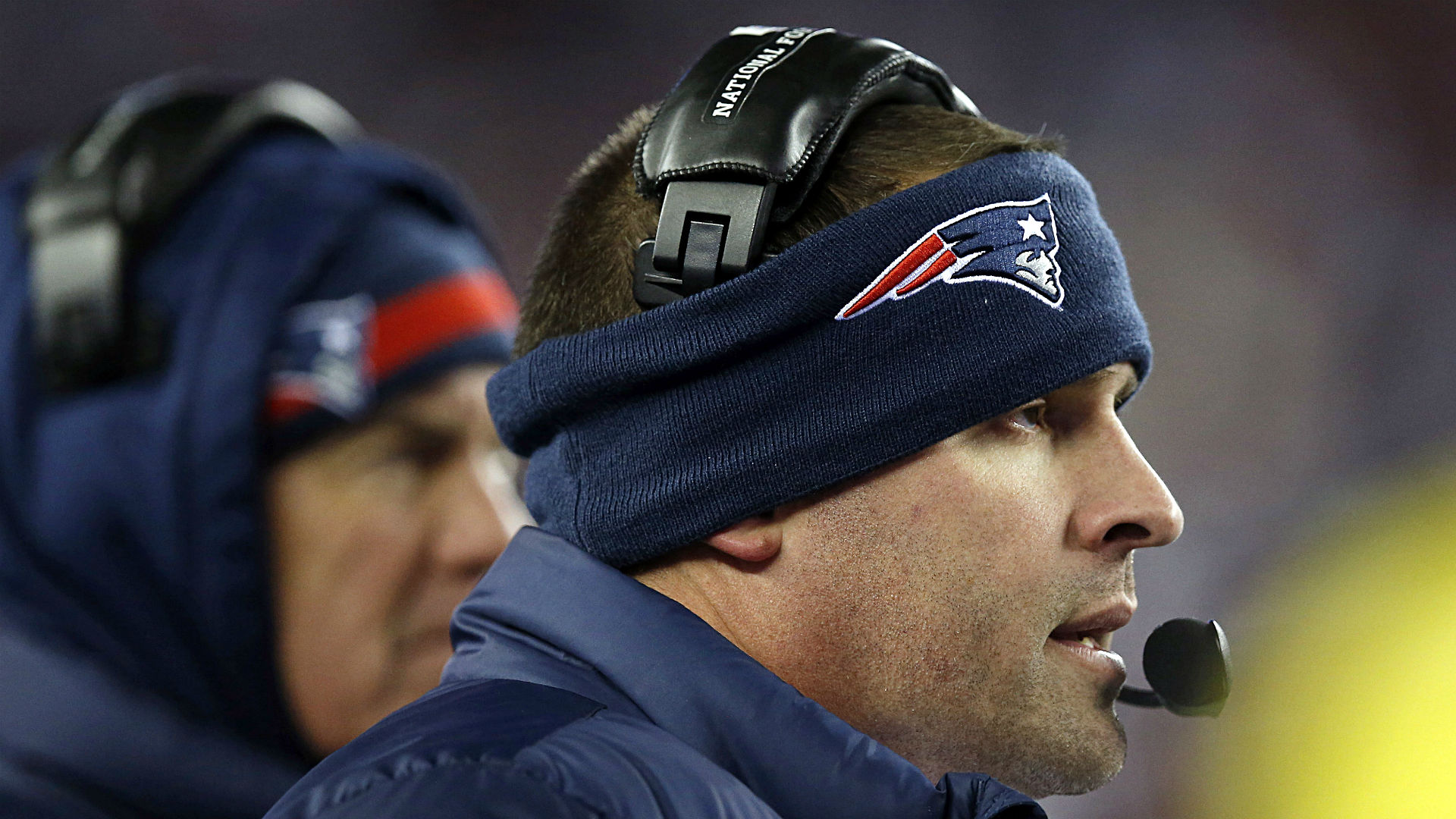 Throughout his time as offensive coordinator, Josh McDaniels has often drawn the ire of Patriots fans. Despite coordinating the most prolific offense in NFL history and winning three Super Bowls from 2014-2018, McDaniels is often a fall guy for a fan base loathe to criticize Tom Brady or Bill Belichick. That trend has exploded this year, with a poor Patriots offense frustrating the New England region. The reality is, McDaniels is one of the best assistant coaches in the NFL and without him the Patriots offense would be worse now and they may have one fewer banner hanging at Gillette Stadium.

During McDaniels’ tenure, the Patriots offense has morphed into different versions and been successful in each case. In 2007, the Patriots took the NFL by storm when they went shotgun and spread out on nearly every snap. The results were a record setting 589 points scored, 50 touchdown passes for Brady, which was another NFL record and 23 touchdown catches for Randy Moss, you guessed it, another NFL record.

The following season, Brady was injured in the first quarter and the Patriots looked headed for a disappointing season. Matt Cassel had struggled in the preseason and New England had brought veteran Chris Simms in for a workout with reports circulating that Cassel could be cut and replaced by Simms. Once Brady went down, the team stuck with Cassel and won 11 games. That season was an elite coaching performance by Belichick and McDaniels, who helped guide Cassel to 21 touchdown passes with only 11 interceptions, a low number considering Cassel hadn’t started a game since high school.

The arrival of Rob Gronkowski and Aaron Hernandez in 2010 caused the Patriots offense to change again, but this instance without McDaniels. Upon his return after coaching with the Broncos and Rams in January 2012, McDaniels picked up right where he left off. Although the team was running a different style of offense than he previously had, they still turned in stellar performances in 2012 and 2013. The team reached the AFC Championship Game in both seasons despite having an almost entirely different set of pass catchers in 2013 than they did in 2012.

Recent history, beginning in 2014, makes an even stronger case for McDaniels. The combined running of LeGarrette Blount and the passing attack of Brady and company helped lead the Patriots to a 12-4 record in 2014. When Blount was out, Jonas Gray became a temporary star after he rushed for four touchdowns in one week against the Colts. The 2014 playoffs were a shining moment for McDaniels. The Patriots were down by 14 points twice to the Ravens in the Divisional Round, but overcame both deficits to win. Brady’s throw to Brandon LaFell for the go-ahead touchdown is sneakily one of the best of his career.

In order to come back from 14 down twice, McDaniels used an ineligible receiver formation on one drive that the Ravens did not know was allowed and used a double pass with Julian Edelman on another. The next week saw the Patriots run over the Colts in the AFC Championship Game before facing a generationally good defense in the Super Bowl against the Seattle Seahawks.

The Patriots’ plan was to methodically drive down the field to score, essentially a death-by-1000 paper cuts strategy. New England was inside the 10 yard-line on their first possession before a Brady interception, but it showed the formula could work. The highlight of the first half for McDaniels was getting Gronkowski split out wide to the right and matched up 1 on 1 with a linebacker for New England’s second touchdown. The Patriots found themselves down 24-14 in the fourth quarter before Brady led two touchdown drives to take the lead and eventually win. It was a signature performance from Brady, one of those that makes him the GOAT. But McDaniels was equally up to the task, getting Gronkowski and Edelman free across the middle for multiple huge third down conversions, including a 3rd and 14 strike to Edelman. After missing an open play on their first touchdown drive of the quarter, McDaniels went back to the same play on the second drive which ended up being the game winning score.

The Patriots offense continued to be at the top of the league in 2015 and the team reached the AFC Championship Game again. In 2016, New England had to play it’s first four games without Brady and went 3-1. For the Patriots offense to start 2-0 with Jimmy Garoppolo and then 1-1 with Jacoby Brissett is a huge credit to McDaniels.  Once Brissett, a rookie, took over for an injured Garoppolo the Patriots had to change their entire offense to fit Brissett and were able to do so. The biggest reason they did not start 4-0 was a finger injury that caused Brissett to be totally ineffective in a week four loss to the Bills. Once Brady returned, the New England offense continued to be elite and arrived at the Super Bowl against Atlanta after blowing out the Steelers in the AFC Championship Game.

Everyone knows the 28-3 story, but McDaniels role in it is not appreciated enough. The comeback was another GOAT performance from Brady. For McDaniels, it was an elite game of adjusting on the fly. Atlanta was playing a significant amount of man coverage and McDaniels began calling plays that put stress on the Falcons outside corners and the linebackers tasked with covering James White. White was constantly open and the corners could not keep up with Chris Hogan and Malcolm Mitchell on the outside. This combination of play calls allowed things to open further for Edelman and Amendola. Once things opened up, the Patriots marched down the field for the remainder of the game. McDaniels also deserves credit for the two-point conversion plays and the game winning score. The first two-point conversion was a Patriots-staple direct snap, but the second one was a brand-new quick pass design to Amendola. The game winning score was also originally designed as a two-point play.

The 2017 Patriots found themselves in the Super Bowl again after coming back from 10 points down in the AFC Championship Game. Despite losing the Super Bowl, the Patriots scored 33 points and Brady turned in one of the best Super Bowl performances ever. He threw for 505 yards while the team totaled 613. McDaniels had receivers and running lanes open all over the field and did as good a job as a coordinator could possible do.

The 2018 Patriots won a Super Bowl that featured 16 total points and one touchdown. If not for McDaniels, that touchdown would not have been scored. Prior to the Super Bowl, McDaniels commanded an offense that scored 36 points on the road in the AFC Championship Game while Brady outdueled Pat Mahomes down the stretch.

The Patriots had trouble getting the offense going all year and McDaniels directed another shift. New England went from the high-flying passing unit of previous years to a powerful running team that used passing as a supplement. McDaniels making that shift had just as much impact on New England reaching the Super Bowl as Brady’s stellar play.

The Super Bowl itself was a defensive struggle. The key moment of the game, and perhaps the best of McDaniels career, was an adjustment New England made on the lone touchdown drive of the game. The Patriots brought in heavier personnel: Rex Burkhead, James Develin and Rob Gronkowski. Because of this, the Rams had to stay with their base defense with linebackers that were not good in coverage. The Patriots then spread the field and forced the Rams to cover the heavier Patriots personnel. New England marched right down the field, at one point running the same play three consecutive times. The signature play was an amazing throw and catch from Brady to Gronkowski. McDaniels adjusting his personnel and formations is a major reason New England got inside the five and eventually scored the winning touchdown.

Fast Forward to 2020 and McDaniels has spent the season trying to bake a cake with half the ingredients. Cam Newton has been a significant downgrade from Brady at quarterback. The Patriots wide receivers are all playing a spot or two above where they should be and the tight end position has been non-existent. Despite this, the Patriots have still won six games so far. McDaniels and the coaching staff also put the Patriots in position to win two more games at the end, but the Patriots were stuffed at the one in Seattle and Newton fumbled on the final drive at Buffalo.

Obviously this is not the standard that fans are used to, but it is a reset year for the Patriots and given what he has to work with McDaniels is doing an excellent job. How many times have we seen Newton miss a wide open receiver or not feel pressure at all? The Patriots offense has changed completely stylistically from the Brady years, which gives them the best chance to score now and is evidence of McDaniels adaptability.

McDaniels has not been perfect in his tenure in New England and will occasionally have the questionable call, such as the 4th and goal option play against the Rams last week. However, he has shown time and again that he is among the best offensive minds in the NFL. Without him, the Patriots would probably have one less championship along they way and several more losses as well. The 2020 season would be an offensive disaster without great coaching and that is exactly what McDaniels has provided. It is likely that he will be an NFL head coach within the next year or two. The Patriots and their fans will miss him when he is gone.