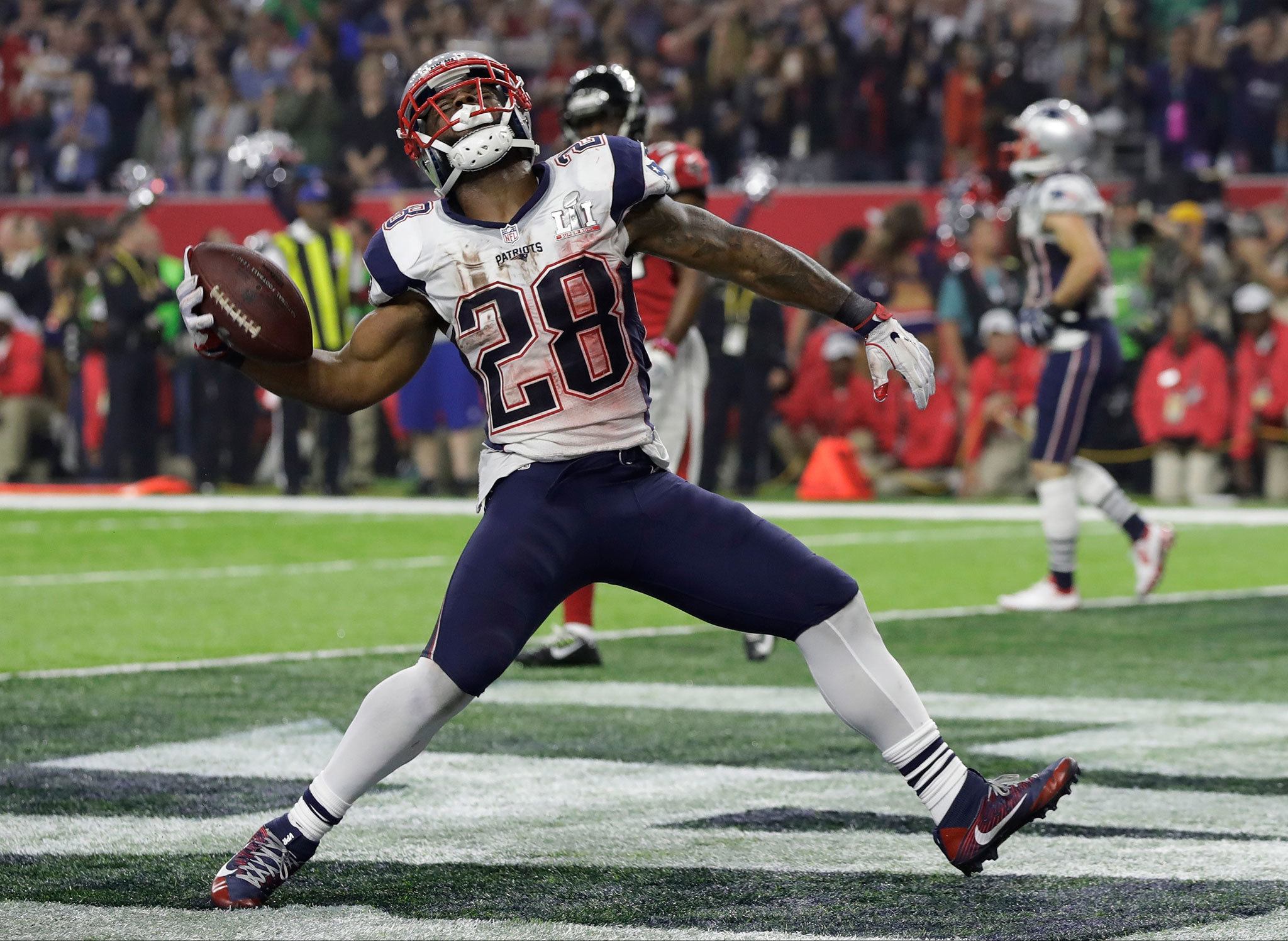 When James crossed into the end zone three minutes and fifty two seconds into the first overtime period in Super Bowl history, he immediately secured a permanent place in NFL lore. His greatness on Sunday night extended far beyond that one play, and the football road he took to get to Super Bowl LI was as arduous as anyone on the field.

Tom Brady may have won the MVP of Super Bowl LI, but White was the best player on the field for the Patriots in the fourth quarter and overtime. White scored three touchdowns after halftime and added a two point conversion to singlehandedly account for 20 of the Patriots 31 points after Lady Gaga jumped off stage.

Things have not always been this glorious for White. A fourth round pick in 2014 out of Wisconsin, White was inactive for the Patriots win Super Bowl XLIX and spent most of 2015 overshadowed by Dion Lewis. When his turn did come in 2015, the results were mostly underwhelming. Following Lewis’s injury in mid-2015, White struggled to live up to Lewis’ shoes. In the last eight games of the 2015 season, White caught 33 passes, but ten of them were in one game against Philadelphia. He gained 358 yards on those catches, which isn’t bad, but 115 of those yards came in that same game against the Eagles. He was also a complete non-factor in the playoffs, catching just one pass against Kansas City and five against Denver, but for only 11 yards.

Given that he had also been a non-factor in the run game, these numbers and his below-average playoff performances led many to view him as a player who could never fill Lewis’ shoes or live up to the impressive resumes of previous third down backs in New England, Kevin Faulk and Shane Vereen.

Things began to change in 2016, however. Although he didn’t become a superstar, he was noticeably more of a playmaker in 2016 and improved his blocking as well. He hauled in 60 passes for 551 yards, both significant improvements off 2015, also caught five touchdowns and, along with a returning Lewis, gave the Patriots more of a threat out of the backfield. Even still, his heroics in Super Bowl LI were not exactly easily predictable. Coming into the game and even throughout most of the first half, White was not at the forefront of most Patriots’ fans minds.

It was late in the third quarter where White began to help write this legendary Super Bowl ending. Atlanta played a mix of cover-three and man coverage for most of the game and one of the chief ways to defeat such coverages is to have a running back that can get open in the flat and beat linebackers in coverage. White began getting open consistently and the Patriots began to climb back on the scoreboard. Brady hit White on a five yard swing pass with two minutes to go in the third quarter to make the score 28-9 and White was just getting started.

After a Danny Amendola touchdown with six minutes left in the game, White again found his way into the end zone on a direct-snap two point conversion play that was reminiscent of Faulk and Vereen. While the MVP award went to Brady and he made his share of heroic plays on the final drive of regulation to tie the game, it was White who accounted for the final 21 yards of the drive including a one yard touchdown plunge that was followed by a Danny Amendola two point conversion to tie the game.

A stunned Atlanta defense was forced to deal with White again in overtime and he capped of the final drive of the season by touching the ball four times, two runs and two catches, and accounting for 15 yards including arguably the two biggest yards in Patriots history when he powered through two Falcons’ defenders to score the winning touchdown in walk-off fashion.

For James White, his career in New England has been a ride that saw him barely play as a rookie, have inconsistencies in his second year, and finish off a third year as a Super Bowl hero. Malcolm Butler parlayed a Super Bowl saving interception into the number one corner job with the Patriots and heading into next season White has the opportunity to build on this momentum and wrestle the top passing back job away from Lewis. Whether he can accomplish that remains to be seen, but no matter what happens the rest of his career his performance in Super Bowl LI will live forever in football history.