There are many ways to experience and define being single. Often what is never revealed in Hollywood hits and TV shows like ‘Sex and the City’ is the internal crash and burn experience of dating when seeking what you want simply isn’t working out. Hence, ‘How To Be Single‘ and its major contribution to the single masses: You don’t have to hold onto the most mainstream version of how to be single once you’ve discovered it.

Christian Ditter (previous works: ‘Love, Rosie’ and ‘The Crocodiles’), the director of ‘How To Be Single’, casts  Aussie Rebel Wilson alongside Dakota Johnson, Leslie Mann and Alison Brie who bring outstanding comedic genius and talent to tell the uncensored story of single people in their twenties. The movie transcends the story line of most romantic comedies such as ‘He’s Just Not That Into You’ or ‘Trainwreck’, the typical boy-meets-girl love story and easy-to-anticipate happy ending. Relationship success, end of story. No, Ditter’s take on being single provides the audience with a snapshot of the dating scene of today’s generation with all its glory-the joy that comes from self-discovery and the hardships of learning to be alone.

‘How to Be Single’ stars Dakota Johnson as Alice, a young, eager college graduate who decides to break up with her long term boyfriend, Jack, and move to New York City to work, party, and live the single life style. Rebel Wilson as Robin helps Alice navigate the wild, concrete jungle of New York and introduces her to the “right” way to be single: lots of one-night stands, endless nights of partying, and everything in between. Both Johnson and Williams are given a generous amount of slam-dunk lines and take the main stage-also supported by rising comedic actors, including Andres Holm and Jake Lacy.

The movie follows the band of characters on their romantic journeys in order to identify the various, ever-evolving definitions of “single”, and what it means for people to be in romantic relationships. The female characters can appear from a truly critical eye, however, un-inspirational in their single lives. The characters, Alice and Lucy (played by Brent Morin), continuously revolve their lives around the men in their life, never truly letting go or moving on from the desire to be in a relationship. Although this is sometimes a reality for many singles, the shear desperation takes away from the depth of the characters. Faith in being alone didn’t appear to be a value of the characters in the movie- the networks of relationships formed by each woman eventually forces them to start another relationship or learn how to be on their own. 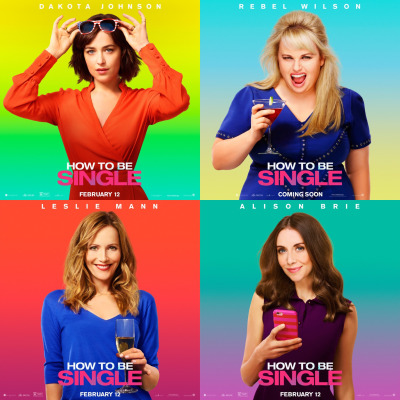 The movie doesn’t mock the single lifestyle, but rather embellishes the single life style incorporating the sad, the bad, and the good that comes with it. Whenever a cliché moment was expected to follow a scene of raw emotion, or whenever a scene depicted realistic scenarios of single people, there was a bizarre, out-of-ordinary scene that utilized the zest of the starring comedic actors and actresses. It is an un-cliché romantic comedy, to put it bluntly.

One of the more relatable scenes includes Alice and Tom. The scene depicts the classic definition of hook-up buddies: drunk one-night stands. To capture the comedy, I am introducing the movie-coined term “drink number”, which is the amount of drinks it takes for two people to collectively reach the point of inevitable, drunk sex. Alice is shown counting the number of beers each of them drank by climbing over furniture and pulling empties out of pockets and couch cushions. The magic drink number 11 is hit, and the two “friends” throw themselves at each other, soon after calling it a mistake and parting ways. This scene captures a realistic hook-up buddy moment that many singles experience. The out of the ordinary scenes don’t end throughout the course of the movie. No one can forget the scene when Meg, a smart, independent doctor who puts her career often before men, goes shopping for baby clothes and is interrupted by her shocked yet dapper, young boyfriend Ken (played by Jake Lacy) who thinks Meg is hiding their conceived child from him(although he finds out after thinking about the excitement of being a stay-at-home dad that the baby was conceived by a sperm-donor, who Meg has not relationship to). Ken calls pregnant Meg crazy- an absolute no-no. You can’t expect decency when calling a woman crazy who has currently very high hormonal count and calorie intake.

The romantic comedy strayed from the mooshy-gooshy chic-flic standard with serious undertones of meaningful substance. In one scene, Alice is alone at her own party and crying in a stairwell after having a fight with her friend, Robin, who continued to rock the sexy single life in her confidence and carefree manor, putting Alice in an emotionally-charged situation by inviting all her exes at one party. Alice’s college boyfriend shows up, and they reconnect in a passionate embrace- a “you’ve been there” moment of falling back into old love. The passionate hook-up is ended abruptly by Alice when she hears him say he is engaged to be married to his current fiancé! The music cuts and Alice is throwing F-bombs. The scene has turned into a joke. Now here comes the meaningful substance: Alice recognizes what Rebel was really saying: for years in NYC, she was lost herself in the quest for love; wrapped up in wanting to be in love that she forgot about her own quest to get to know and define herself.

Reality checks are hard. We all can relate to that moment when you finally gather the strength to move on, fuck it, or simply follow your dreams. Being in a relationship should never be forced or desperately sought for.

The movie shows many scenarios in which characters follow through on the things they want to do, un-blinded by the desire to be in a relationship: the moment when Meg holds a baby and realizes she wants a child, the clip when Alice is reading a book in her acclaimed reading window, and the hilarious scene when Lucy has a mental breakdown and pulls out her hair extensions whilst reading to small children in a library, recognizing that working hard to be in a relationship is simply too exhausting. However, the movie fails to dig into the theme of self-discovery that they push so hard as the essential light of being single. Alice basically has a movie-long relationship with her ex-boyfriend that she breaks up with in the beginning of the movie, yet fails to really define herself as a person. Meg gives into her relationship with Ken, but we never know her identity as a mother. It seems as though the idea of knowing one’s self  is never really celebrated or separated from the relationships that are recycled by the characters in the movie.

All in all, if you’re single and living in a city in some country or state-have no fear. ‘How To Be Single’ brings a comedic cushioning to the ups and downs of the modern, Cosmopolitan single life. With the hilarious performance of the comedic actors and actresses, the movie is pleasant and funny at the least. Prepare for the un-cliché cliché of self-discovery, the quest for love set aside.

Patriots Beat Themselves in Loss to Saints

Jon Lyons - September 27, 2021 0
The New England Patriots suffered their worst loss of the young season on Sunday when the New Orleans Saints came to Gillette Stadium and...