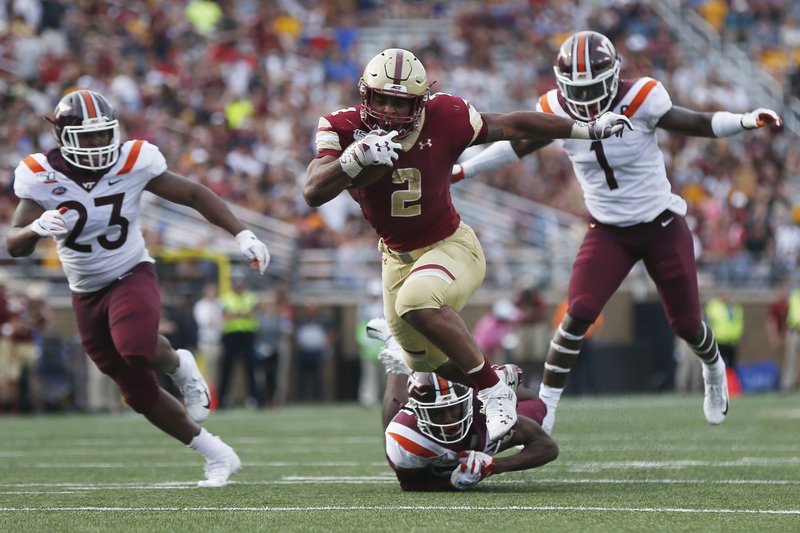 AJ Dillon is a machine, he is scary, he is a modern Hercules, but most of all he is the next great running back in the NFL.

AJ was born in New London, Connecticut, but would eventually play football at the Lawrence Academy in Groton Massachusetts. With his strong high school career, Dillon was highly sought after by big name schools like Michigan, Penn state, Mississippi State and Notre Dame. He would eventually commit to Michigan and flip to Boston College to be closer to home.

Dillon hit the Ground running at Boston College. In his first season, he ran for a school record 1,589 yards and 14 touchdowns and he won ACC Rookie of the Year. This cemented himself as one of the top running backs in the country.

The next two years of Dillon’s college career weren’t different, he would finish with 4,382 yards which holds the record for most yards in school history and is second all time in ACC history. Pairing that with 38 career touchdowns in three years made AJ the most dominant player in Boston College history.

You look at all these stats and say, “ Wow! This kid is going to be a great first round pick!” Well reader, I hate to say he is projected as a third round pick up.

The biggest mark against AJ is his “mileage.” During his time at Boston College, he had 845 carries over three years. That’s an NFL number you don’t see college running backs with that many carries that can stay healthy

Here’s why Dillon is going to be amazing in the NFL.

He is the new breed of running back. He weighs in at 247 of pure muscle. He is a more power running focused Saquon Barkley. His ability to run through defenders and expose open space is second to none.

Dillon is a lead running back. He is the work horse for an NFL team. As a coach, you should put him in early and let him get you the yards you need to set up a big play. He can block and catch which makes him perfect for play action.

He should be an early second round running back, but if he falls I could see him landing with a team that has a two running back set. The Saints could pair him with Kamara and have a deadly running game again. The best placement for him would honestly be the Patriots. Dillon could take the lead role and split snaps with Sony Michelle giving the Patriots the perfect run offense.

Dillon is the most underrated running back in this draft. He will shock the world and help your fantasy team.