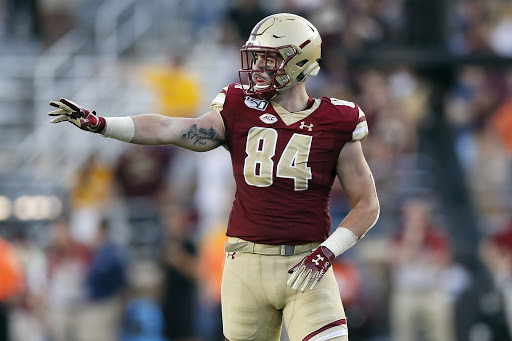 Bill Belichick has been trying to fill a Gronk-sized hole for a few years now and have been unsuccessful at every stop. That ends with Burt, who fits the tight-end mold at 6’3 260 lbs., but that’s not what will make him special to Patriot fans.

Burt has revived the coveted and totally real (don’t look it up) “Most Massachusetts Athlete Award,” by me. He was born in Lynnfield and played his high school football at St. John’s Prep before going to Boston College. Burt went undrafted, but was quickly signed by the Patriots. He most likely fell because of a lack of film and injury concerns and the fact that he played his time behind Tommy Sweeney who was drafted by the Bills.

For the first two years, Burt was utilized as a classic blocking tight end. This allowed star running back, AJ Dillon to run wild on the field. Toward the end of his college career, Burt started to find his stride and showed glimpses of promise as a pass catcher and a run after catch tight end.

Ideally, he will be able to give Jarrett Stidham or Brian Hoyer enough time in the pocket to make the right throws and slide out for a nice reviving target. This signing could also be huge for running back Sony Michel, who had a down year and could have a bounce back because of Burt’s presence.

Now don’t go marking Jake Burt as the new top Fantasy tight end. He will be a typical Patriot. He fills his role and doesn’t need the hype or flash. He’s going to play with a head full of steam and a chip on his shoulder. ​