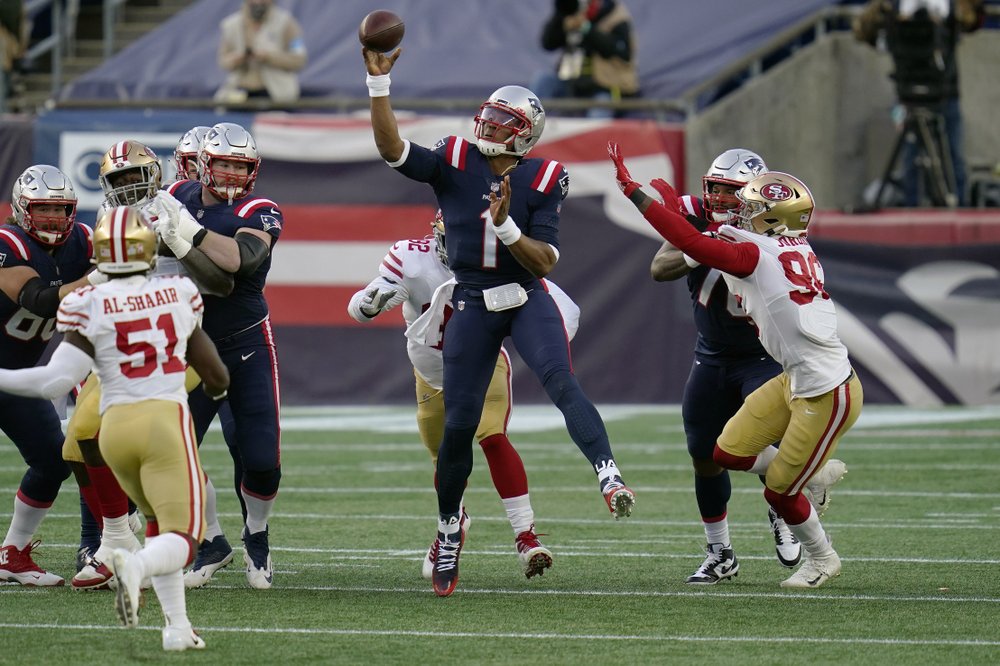 The Patriots turned in one of their worst team performances of the Century on Sunday, looking listless for much of the game and losing to San Francisco 33-6. The New England defense forced one punt while the offense failed to score a touchdown and turned the ball over four times.

There were no bright spots offensively. Cam Newton played his worst game as a Patriot from the beginning, not seeing N’Keal Harry breaking open on the second 2nd Down play of the game (team punted two plays later) and then overthrowing an open Damiere Byrd on the second drive, which cost a big gain and position in the red zone. Five more possessions and three interceptions later, Newton was on the bench and Jarett Stidham threw another interception, showing again that he is not ready for the NFL. The defense was lifeless, allowing the 49ers to do whatever they wanted for most of the evening.

The question now is: how does this team, and specifically Cam Newton, recover? They can, but they need to do so quickly. New England travels to Buffalo this Sunday and hosts Baltimore two weeks later. If things don’t improve, the Patriots could be 3-6 on Monday, November 16th.

The first and most important step is to get improved quarterback play. That starts and ends with Newton. Stidham is not ready yet and Brian Hoyer showed against Kansas City that he shouldn’t play again. Newton looked terrific the first two weeks of the season. His play since then has been steadily declining and culminated in Sunday’s performance.

Newton needs to improve his play and fast. It will be on the coaching staff to correct any mechanical issues. In addition, Newton has been slow on many of his reads and has looked indecisive while in the pocket. Perhaps more practice time will help that, but New England needs to find a solution to that issue. Accuracy and decision making are the most important traits for quarterbacks and Newton is struggling in both areas.

The pass catchers have been much maligned this season and did not play well against Kansas City and especially against Denver. However, the wide receivers got open on Sunday and were not found. Despite this, the Patriots do not have a wide receiver that scares opponents and could sorely use one. Tight end continues to be a black hole in the passing game. Ryan Izzo is the definition of an average player and New England’s two rookies, Devin Asiasi and Dalton Keene, have played sparingly and look like guys with potential to help the team more in 2021. Josh McDaniels is a terrific coach, but this is least amount of overall pass game talent he has had in his time with the Patriots.

The New England defense was just as concerning Sunday and has not been the elite unit that ended 2018 and began 2019. The normally good secondary was torched for five passing touchdowns in week two and after a rebound stretch against Las Vegas and Kansas City, the Patriots Denver to drive down the field for six field goals two weeks ago. Yes, they held Denver without a touchdown, but also didn’t force a punt until the fourth quarter. The 49ers rolled over the Patriots from the beginning, marching 75 yards on the opening drive and finishing with 33 points.

The biggest hole for the Patriots is up the middle; at defensive tackle and inside linebacker. Lawrence Guy has been solid, but he’s alone. The 49ers ran on New England with impunity and the team has allowed 20 first downs rushing the past two weeks. The Patriots don’t have depth on the interior of their defense; they either need to try to add a piece or use less defensive backs than they have been, which is a gamble in itself despite their strong secondary.

The Patriots sit at 2-4 and it is the most precarious October for the team since 2002, when the defending champion Patriots stumbled through a four-game losing streak before finishing 9-7 and missing the playoffs. Finishing 9-7 looks good right about now.

However, there is still time and opportunity to get the ship right. The second half of the Patriots schedule is much easier than the first half and the coaching staff still has an opportunity to help get Newton back on track. Adding an upgrade of significant importance at wide receiver or defensive tackle is less likely. Bill Belichick and company can still salvage the season, but time is running out.

Here’s Why Pedroia is a Hall of Famer