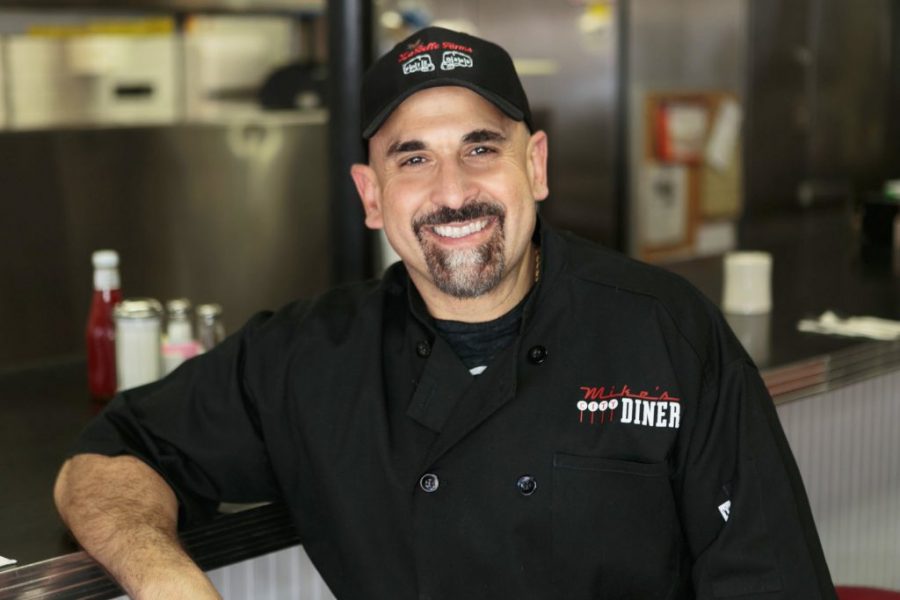 Chef and entrepreneur Jay Hajj of Mike’s City Diner fame appears on a special remote episode of “Diners, Drive-Ins and Dives” this Friday night (May 8).

The most recent socially distanced installment of Guy Fieri’s venerable Food Network vehicle is titled “Takeout: Tastier at Home.” It features Hajj and three other favorite Triple-D chefs from around the country – all in an effort to raise money for Restaurant Relief America.
Each chef instructs Fieri how to prepare a signature recipe from their own home base – Hajj working from Mike’s City Diner in the South End – as the Food Network star recreates the dish in his California backyard kitchen.
“It was very different than our typical show, but still very fun. Guy made it very fun,” said Hajj, who filmed the episode in April. “I’m in Mike’s City Diner and looking out the windows at Washington Street. There’s nobody on the street, no cars driving by. It’s just how the times are. But we made the most of it for a good cause.”
Fieri chooses his favorite dish at the end of the show and donates to the relief fund in the name of the selected chef.

Hajj will also donate to the fund. Fieri in this episode prepares Hajj’s kofta kebab gyro. Hajj adds the gyro to the Mike’s City Diner take-out menu on Friday to celebrate the fundraising episode of Triple-D. All proceeds from the sale of the kofta kebab gyros this weekend will be donated to the relief effort.

Hajj’s kofta recipe first appeared in his 2017 book, “Beirut to Boston: Comfort Food Inspired by a Rags to Restaurants Story.” The Middle Eastern-inspired favorite has since joined the list of celebrity-chef sandwiches that appear on the menu at Parish Café in Boston’s Back Bay. The kofta recipe prepared by Hajj and Fieri Friday night appears here.
“We’ve been very lucky here at Mike’s,” said Hajj. “The neighborhood has really rallied to support us. We’ve changed the menu and have been selling a lot of food and keeping as many people employed as possible. It’s not our normal business. But we, me and the staff here, appreciate every chance we have to serve our community.”  Mike’s City Diner takeout is available via Uber Eats, DoorDash or by calling the restaurant (617-267-9393).
Hajj and Mike’s City Diner is joined on the Food Network Friday night by chefs from Pagoda Chinese Restaurant of North Pole, Alaska; Voula’s Offshore Café of Seattle; and Pizzeria Luigi of San Diego.
All four restaurants are among Fieri’s personal favorites from the annals of “Diners Drive-Ins and Dives.” Hajj has become a Fieri Food Network regular, appearing several times on “Guy’s Grocery Games” and “Guy’s Big Bite” as well as Triple-D, while also cooking together at various charitable events.
The “Takeout: Tastier at Home” episode of “Diners, Drive-Ins and Dives” debuts Friday night, May 8, at 9 p.m. Repeats of the show will air Saturday at midnight, Friday, May 15 at 6 p.m. and Saturday, May 23 at 10 p.m.