Noted celebrity chef and restaurateur Jason Santos is pleased to announce the opening of his third restaurant venture, Buttermilk & Bourbon. Located on the corner of Dartmouth Street and Commonwealth Ave, the highly-anticipated Buttermilk & Bourbon will deliver Southern hospitality to guests in the heart of the Back Bay.

Drawing on the South’s trademark charm, the 150-seat restaurant will boast a swanky, cozy atmosphere, and offer guests an innovative American menu with Southern-influences. Santos, who currently owns and operates Boston’s Abby Lane and Back Bay Harry’s, aims to channel his love of New Orleans and all things Southern to transport guests to the Bayou. 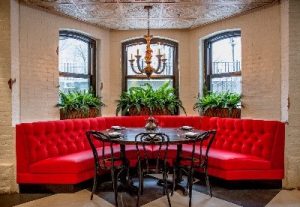 “I have been cooking different variations of American comfort food my whole life and when I first visited New Orleans, I fell in love with the cuisine and the energy of the city,” said Santos. “I wanted to make a restaurant that exudes everything that the South embodies- awesome food, inventive drinks, fun people and great energy.” 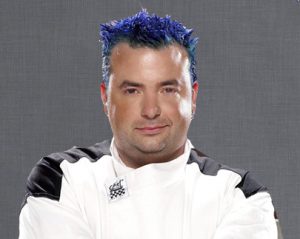 Buttermilk and Bourbon’s beverage program will feature a wide variety of options for imbibing. In addition to an expansive offering of beer, wine, classic cocktails, and signature drinks, Buttermilk and Bourbon will serve up hurricanes-on-tap, large-batch cocktails, and a selection of bourbon-based drinks. They will also have frozen hand grenades available at the bar.

Designed by Erica Diskin of Assembly Designs, the intimate space will offer several distinct New Orleans-inspired neighborhoods featured in each separate room. Neighborhoods that are featured in each space include: The French Quarter, The Garden District, Bourbon Street, and a Voodoo Lounge.  The vibrant scene includes brick walls covered in New Orleans-inspired murals, a large center bar suitable for optimal guest and bar staff interaction, and separated dining rooms that offer varied atmospheres for guests to enjoy as well as a private dining room. Exuding the allure and vibrancy of the South, Buttermilk and Bourbon will feature a reclaimed fireplace, reclaimed church pews as seating, tin ceiling tiles, dramatic chandeliers and red velvet banquettes. The space will include seating for 150 indoors, a full bar with lounge seating, an interactive oyster bar, and a 40-seat patio. 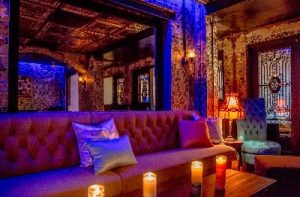 About Buttermilk & Bourbon: Buttermilk and Bourbon will be open daily for dinner from 5 p.m. until 11 p.m. and soon will open for brunch on Saturday and Sunday from 11:30 a.m. until 2 p.m. The bar will be open until 1 a.m. daily.  Buttermilk and Bourbon will be located at 160 Commonwealth Ave. in Boston’s Back Bay neighborhood. Please visit www.chefjasonsantos.com for up-to-date information or log onto  www.buttermilkbourbon.com for reservations or call 617-266-1122.

About Chef Jason Santos: Award-winning Chef Jason Santos is a Boston-based chef and restaurateur who has moved up the culinary ranks in some of Boston’s best kitchens for over ten years since graduating from Newbury College’s Culinary Arts Program. Santos currently owns and operates Boston hot-spots Back Bay Harry’s, located at 142 Berkeley Street, and Abby Lane, located at 253 Tremont Street and the soon-to-open Buttermilk and Bourbon on Commonwealth Ave. Known nationwide for his bold, blue hair and his even bolder, larger-than-life personality, Santos’ cuisine seamlessly combines Asian, French and traditional American flavors in inventive and creative ways.

Gaining national notice as a celebrity chef, Santos was a finalist on Season 7 of Fox’s hit television show Hell’s Kitchen, is a regular guest on the CBS television show The Talk, and a recurring guest on subsequent seasons of Hell’s Kitchen. He has appeared nationally on the Today Show and the CBS Early Show, and appeared on this season of Spike TV’s Bar Rescue as a Culinary Consultant. For more information about Jason Santos, please visit www.chefjasonsantos.com.