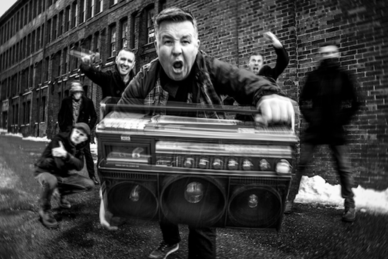 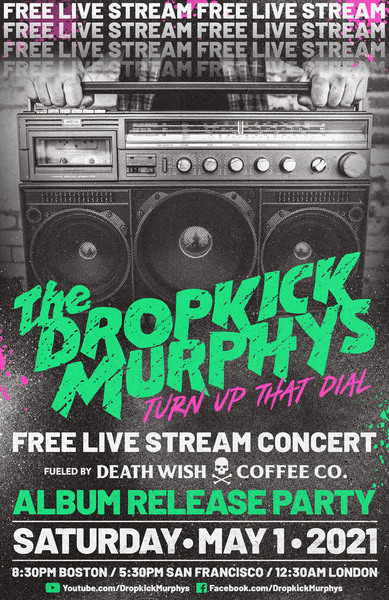 Dropkick Murphys return to the virtual stage this Saturday, May 1 at 8:30 PM ET / 5:30 PM PT for the Turn Up That Dial Album Release Party Free Live Stream Concert fueled by Death Wish Coffee…and sponsored by YOU.

This streaming performance – with no in-person audience – will celebrate the April 30 release of Dropkick Murphys’ 10th full-length studio album Turn Up That Dial, via band-owned Born & Bred Records. It will be simulcast worldwide via www.DKMstream.com and will feature a completely new set with songs from the band’s new album, along with a variety of fan favorites, with Dropkick Murphys performing socially distanced on an arena-sized stage with a full LED screen once again.

Instead of charging for tickets to the Turn Up That Dial Album Release Party Free Live Stream Concert, the band will “pass the virtual hat” to take donations to help support their efforts to keep paying their employees, and a portion of donations will go to charity as always.

Turn Up That Dial was produced by Ted Hutt and is available for pre-order now. With the 11 tracks on Turn Up That Dial, Dropkick Murphys celebrate the simple pleasure of music, the relief and release from worry that comes when you “turn up that dial” and blast your troubles away. The first two singles “Middle Finger” and “Queen Of Suffolk County” are out now.