Skrewball Peanut Butter Whiskey and Kane’s Donuts have teamed up to present Comfort Food & Cocktails, a series of tasting events to benefit local food banks across the Commonwealth during these challenging times and particularly through the holidays. Skrewball Peanut Butter Whiskey and Dirty Water Media are working with local food banks on the north shore, south shore, metro west and around Greater Boston to make up to $500 in donations in each location. 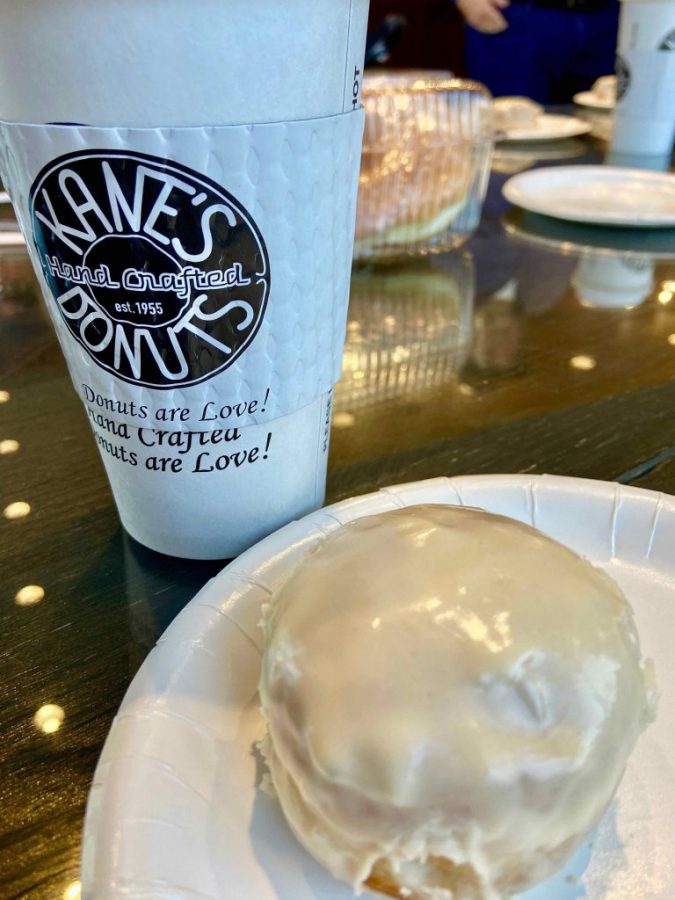 As part of this campaign, Skrewball Peanut Butter Whiskey and Dirty Water Media have scheduled promotions on site at five different liquor stores throughout Massachusetts. At each of these promotions, Dirty Water Media will be taping a new half hour show for NESN featuring some of that region’s best “Comfort Food & Cocktails” as Skrewball Peanut Butter Whiskey hand out their own signature comfort food item – “Peanut Butter Poppers” – created by Kane’s Donuts and coated with their sweet and deliciously decadent Screwball-infused honey-dip glaze. For every bottle of Skrewball sold on location at each of these promotions, the brand will donate $1 to a local food bank – up to $500 per food bank. 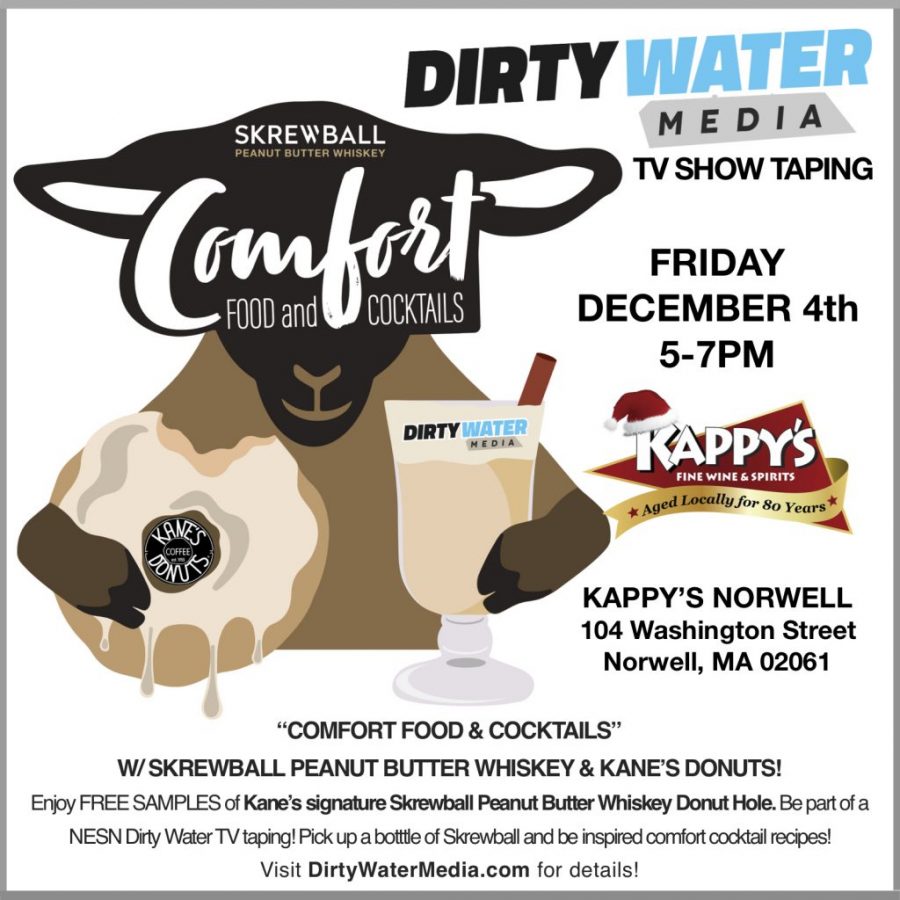 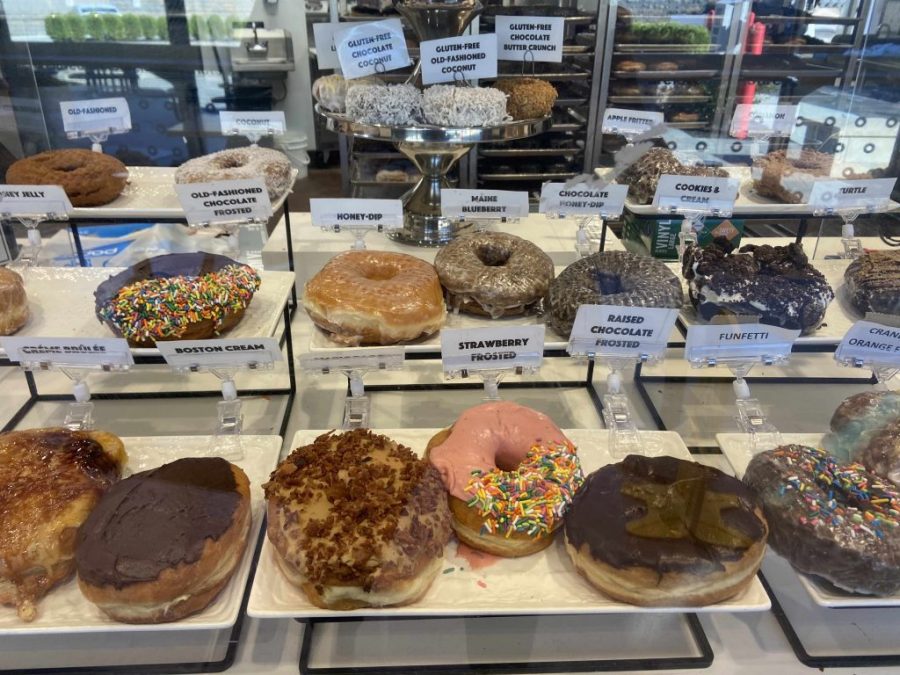 Join the “COMFORT FOOD & COCKTAILS” promotion at these locations:

“We’re thrilled to collaborate with Kane’s Donuts on this campaign,” said Maria Rocci, Northeast Area Manager, Skrewball Peanut Butter Whiskey. “Kane’s and their gourmet donuts have a fantastic reputation for creating uniquely decadent comfort foods making them the perfect partner for this campaign that not only celebrates the holidays, but also gives back to local communities during very challenging times.”

About Kane’s Donuts – Kane’s Donuts is New England’s legacy donut shop, ranked top-10 in the United States for serving handcrafted donuts and treats that are made fresh daily, and with local ingredients. Known for a superior daily selection of artisanal flavors and rotating monthly favorites, its continuous 64 years of service began with Kanes’ now-iconic “Legacy” store, which opened in 1955 in Saugus, Mass., and remains a local favorite for serving handmade products, seven days a week. For its 60th anniversary in March 2015, Kane’s opened a second location (“Kane’s Downtown”) in the heart of Boston’s financial district at International Place; and in March 2019, Kane’s reimagined the donut-buying experience with “Kane’s Flagship,” its largest location (with a drive-through and donut-prep observation area) at Essex Landing in Saugus. In 2018, Kane’s was named “Best Donut” by both Boston Magazine and the Improper Bostonian, and in 2019 won “Best of the North Shore” by North Shore magazine. It has appeared in Travel + Leisure, Saveur and Yankee magazines, among others; it’s consistently recognized by the Boston Globe, Boston Herald and local media; and has earned local and national attention for what many consider the best gluten-free cake donuts available at a traditional donut shop. Find Kane’s at www.kanesdonuts.com; on Instagram (@kanes_donuts) and Facebook and Twitter: (@kanesdonuts).

About Skrewball Peanut Butter Whiskey – Born in Ocean Beach, California, Skrewball’s story is just as unique as the contents of the bottle. Skrewball started from the passion of Steven Yeng, a bartender and foodie who owned a local watering hole. Yeng’s bar and restaurant was known for its band of misfits, black sheep and Skrewballs that have always encouraged the community to join the nightly party—but more importantly, were always there to support the community when anyone needed a helping hand.  When he first combined his favorite classics—peanut butter and whiskey—to create the most delicious shot, many snubbed their nose at this idea. But, it didn’t take long before it became their signature shot. So Yeng teamed up with his wife Brittany – a chemist and pharmaceutical patent attorney – to create Skrewball Peanut Butter Whiskey. To their surprise, they ended up creating something even better than the original shot.