TUNE IN TO “ONE NIGHT LIVE” TO HELP SAVE MASSACHUSETTS RESTAURANTS! 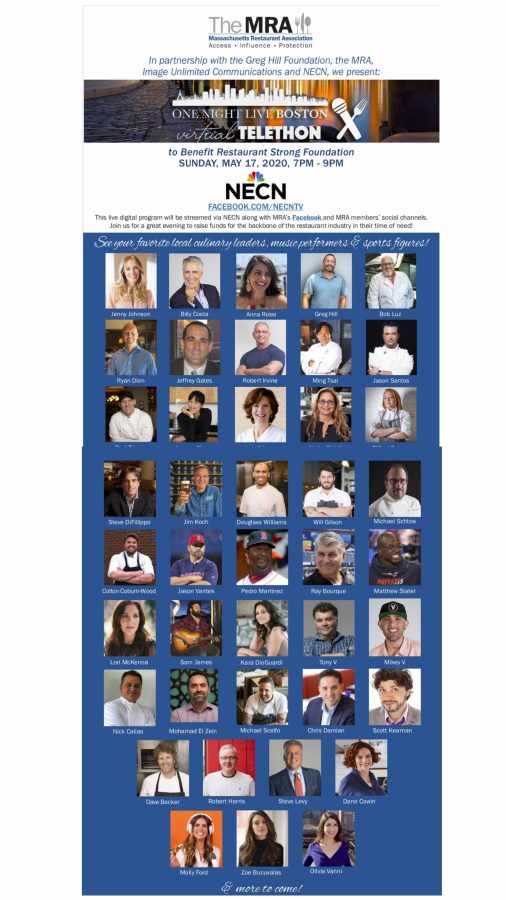 Slated to perform are BMI singer/songwriter Sam James from NBC’s the Voice, Grammy nominated songwriter and former American Idol judge Kara DioGuardi Grammy award–winning songwriter Lori McKenna, as well as nods from Boston musicians such as G. Love and many more!
Chef and culinary appearances include: Chef Robert Irvine, Chef Tiffani Faison, Chef Michael Schlow, Chef Will Gilson, Chef Douglass Williams, Chef Dave Becker, Chef Michael Scelfo, Chef Ming Tsai, Chef Joanne Chang, Chef Nick Calias, Chef Paul Turano, Chef Jason Santos, Chef Colton Coburn-Wood, Matt White, Restaurateurs: Kathy Sidell, Ryan Dion, Steve DiFillippo, Jeff Gates, Nancy Caswell, Mohamad El Zein, Robert Harris and many, many more!
From the world of sports and entertainment look forward to seeing appearance from: Comedian Tony V, former Boston Red Sox, Pedro Martínez, Jason Varitek, from the New England Patriot’s Matthew Slater, former Boston Bruins and restaurateur Ray Bourque with others joining the bill daily!
Appearances from members of the food and lifestyle media community include: Greg Hill from the Greg Hill Morning Show, Billy Costa + Jenny Johnson from Dining Playbook, Scott Kearnan, Food Editor from Boston magazine, Olivia Vanni creator of Served from the Boston Herald, Molly Ford from The Food Lens, Dave and Dan Andelman from The Phantom Gourmet, Erin Kuschner Food Writer, Boston.com, Dana Cowin, editor, author and radio show host, best known for her two decades as the Editor-in-Chief of Food & Wine, ESPN’s Steve Levy,  KISS 108’s Mikey V and Zoe Bucuvalas from Dirty Water Media to name a few!
Hosted by Anna Rossi from NBC10 Boston’s The Hub Today, the goal of this event is to above all raise vital funds for the Restaurant Strong Fund which is a collaboration between The Greg Hill Foundation and Samuel Adams to support those from the restaurant industry here in Massachusetts who have been impacted by the Covid-19 closures. Beyond streaming on NECN.com and NECN Facebook, the live show will be shared via Facebook by over 1500+ restaurant’s social platforms across the State of Massachusetts and presents one of the largest opportunities in the country to help displaced employees
Tune in live to NECN’s Facebook’s on Sunday, May 17th, 2020 from 7:00PM-9:00PM to see all the action!
About Massachusetts Restaurant Association (MRA): Founded in 1934, the Massachusetts Restaurant Association (MRA) is a trusted not-for-profit association committed to the advancement of the foodservice industry in the state of Massachusetts. The MRA exists to help food and beverage providers succeed through education, cost-savings programs, networking, and government advocacy. Together with the Massachusetts Restaurant Association Educational Foundation, the MRA works to promote current and future industry leaders. Learn more at www.themassrest.org.
About The Greg Hill Foundation’s Restaurant Strong Fund: The Greg Hill Foundation and Samuel Adams have teamed up to support those from the restaurant industry across the country who have been impacted by the Covid-19 closures. To celebrate 20 years on the air at WAAF in Boston, Greg Hill formed a foundation in June of 2010 that would respond to the immediate needs of families that had been touched by tragedy. Feeling a strong obligation to communities that had supported his radio show, he wanted to create a foundation that would be able to harness his incredibly generous media audience and that would be able to assist in a tragic time at a moments notice. Learn more at www.thegreghillfoundation.org