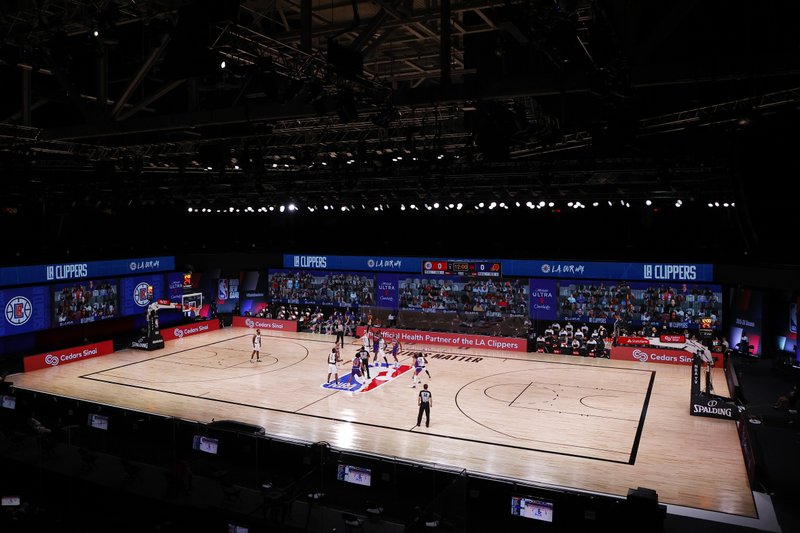 I’ve only seen Wolf of Wall Street a handful of times, but I can tell you that investments will make or break anyone. Even if that “anyone” is a multi-billion-dollar league such as the NBA. Amid an unprecedented global crisis, the sports world has seen its respective commissioners take drastic measures in the hopes of salvaging play, with varied degrees of success. Then you have Adam Silver’s $150 million investment in the so-called “bubble” at where else? The Walt Disney World Resort. The iconic resort after four months of closure, just reopened the gates to its kingdoms for the general public to get its first taste of simulated X-Wing battles. And, off of the aptly named Victory Way is where you’ll find ESPN’S Wide World of Sports Complex: site of the bubble restart.

Games are underway as LeBron and 21 other teams have taken their talents to Florida for playoff qualifiers in a way none of us will soon forget. The NBA and the Walt Disney Company have built a campus-like environment that can only be compared to the Olympic Village. Only, the IOC doesn’t throw quite as good a party as Disney. But beyond Kemba Walker and his teammates waking up to views of Cinderella Castle, in formulating the bubble, Disney and the NBA have instituted some of the strictest safety protocols around.

According to Sports Illustrated, players, coaches, team personnel and media, adhere to checklist that combines COVID precautions with verifying Disney resort credentials. After everyone gets their respective temperatures and oxygen levels checked to safe levels, it’s showtime (not the Lakers). Games take place at one of three arenas, including the HP Fieldhouse, which serves as the site of a non-conference NCAA men’s college basketball tournament each Fall. Now, I’m obviously not there in person to attest to the electricity of the atmosphere, none of us are allowed. But, of the games so far, the NBA and Disney have done an exceptional job of bringing one of our favorite sports back. Much in the same way we remember it.

In this push for playoff seeding, atmosphere is everything. And right now, there is a massive component of that missing: the fans. What Disney has done is to divert the viewer’s attention away from the empty stadiums by instead keeping the focus directly on the in-game action. What I have witnessed thus far is mostly reminiscent of a standard national broadcast, pre-pandemic. You’ve got interviews between quarters with Lisa Salters and Brad Stevens. You’ve got Tacko Fall checking in with the scorer’s table, and you’ve got quippy banter between Charles Barkley and Ernie Johnson. It’s not quite the same, the sheets of plexiglass separating Mike Breen and Jeff Van Gundy remind us what year we’re living in. But the effort is there.

Surprisingly, that’s not all. To avoid the disturbing the aesthetic of a few thousand empty seats, the crew has installed these ultra-high-resolution video projection screens, which light up according to the action. If Jaylen Brown drains a three, dollar sign money bags illuminate the video wall. Before the game, viewers will notice a virtual American flag rippling, while players kneel arm in arm with their Nike-sponsored “Black Lives Matter” warm-up shirts on.

Disney, a company under the utmost public scrutiny, has made the choice, however begrudgingly it might be or seem, to stand with the world’s movement towards social justice. This a huge milestone for a company whose subsidiary, ESPN, has been the home of colossal matchups for over 40 years. Disney constantly faces a tremendous amount of pressure to impress viewers and to deliver a world-class product. I can attest to this as a lifelong consumer of their brand, and as someone who used to be on their payroll. The Walt Disney Company is quite literally, “The Big Leagues”.

With the playoffs and NBA Finals looming, Disney’s involvement should quell the fears of casual and diehard fans. They have implemented a system. And, that system works: Keep a tight watch on things going in, on things going out, and give basketball fans a hyper focused version of the product they came to see. Is it working? Well, the bubble has not seen a player test positive for COVID-19 since July 13th, so you tell me… While leagues such as Major League Baseball are in jeopardy of being shut down for the season, ambition and planning has paid off for the NBA restart.

One of my favorite movies is WALL-E: Disney/Pixar’s science fiction masterpiece in which a little robot with a can-do attitude cleans up after a planet in dystopic disrepair. On one fateful day, WALLE-E finds a living, breathing plant—a sign of life and a literal symbol of hope that Earth could be inhabitable again. That’s kind of like the NBA right now. And the Walt Disney Company is majorly to thank for that. It’s far from perfect, but it offers some legitimately joyful entertainment. That’s no small feat. Considering that as I type this, college football is getting situated on the shelf. MLB is considering its own playoff bubble, but we cannot guarantee that the season will finish. And the NFL? No clue. So settle in and soak in the hoops while they’re here. Enjoy the ferocious Anthony Davis slam dunks, re-watch The Last Dance and queue up the “NBA on NBC” theme song. The NBA is back in a big way. Maybe not in the biggest way, and certainly not in the way that we would typically want it. But it’s back. And that’s big.