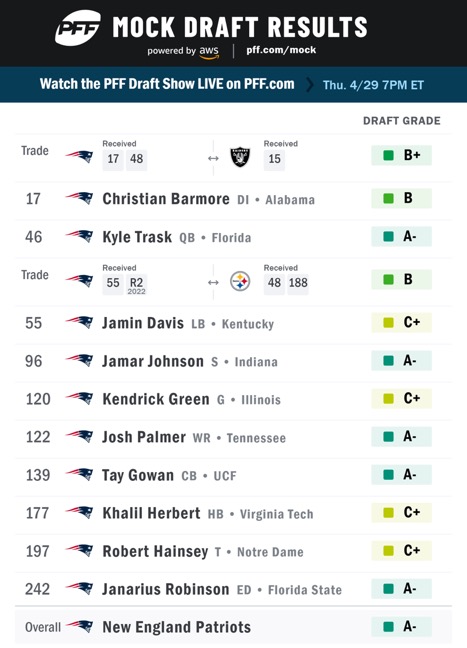 With the NFL Draft beginning on Thursday, I completed my final Patriots Mock Draft (barring any major pre-draft trade). Round 1 provided an opportunity to trade down two spots and still land Christian Barmore, a potential franchise defensive tackle.

Round 2 had the most fireworks, with the Patriots getting their QB of the future in Kyle Trask as well as another trade down and the selection of linebacker Jamin Davis. The quarterback question is the most important one for the Patriots and Trask can be the answer for New England. He performed well against a high level of competition in the SEC and went toe to toe with Alabama’s elite offense in the SEC Championship Game. Trask had 4,283 yards and 43 touchdown passes in 2020. He can push the ball down the field but also has good short yard accuracy.

Davis is a 234-pound linebacker who plays the run well but also runs fast enough to cover players sideline to sideline.

Jamar Johnson could have a big role in the future for the Patriots depending on how long Devin McCourty plays. Josh Palmer is a big bodied receiver who can make tough catches in traffic. He also performed well against top SEC competition including Alabama. He could be one of the best sleepers of the draft.

Tay Gowan opted out of 2020, but was a terrific coverage player in 2019. He likely would be drafted higher had he played in 2020. Khalil Herbert intrigues me as a potential depth option at running back and also potential future started depending on how the futures of Sony Michel and James White shake out. Robert Hainsey could provide needed tackle depth and could be a future option there if Trent Brown leaves the Patriots after this season.

Jon Lyons
Jon Lyons is a contributor to Dirty Water Media and is a co-host of the Straight Facts Homie T.V. show on TCAM-TV. He is also a regular guest on Boston sports radio. Jon holds an MBA and M. Ed from Endicott College.

Are these burgers 🍔 really 100% plant 🪴 based? Dirty Water Media’s Shannon Fairweather still isn’t sure!! They were that good! Check out the...
Read more