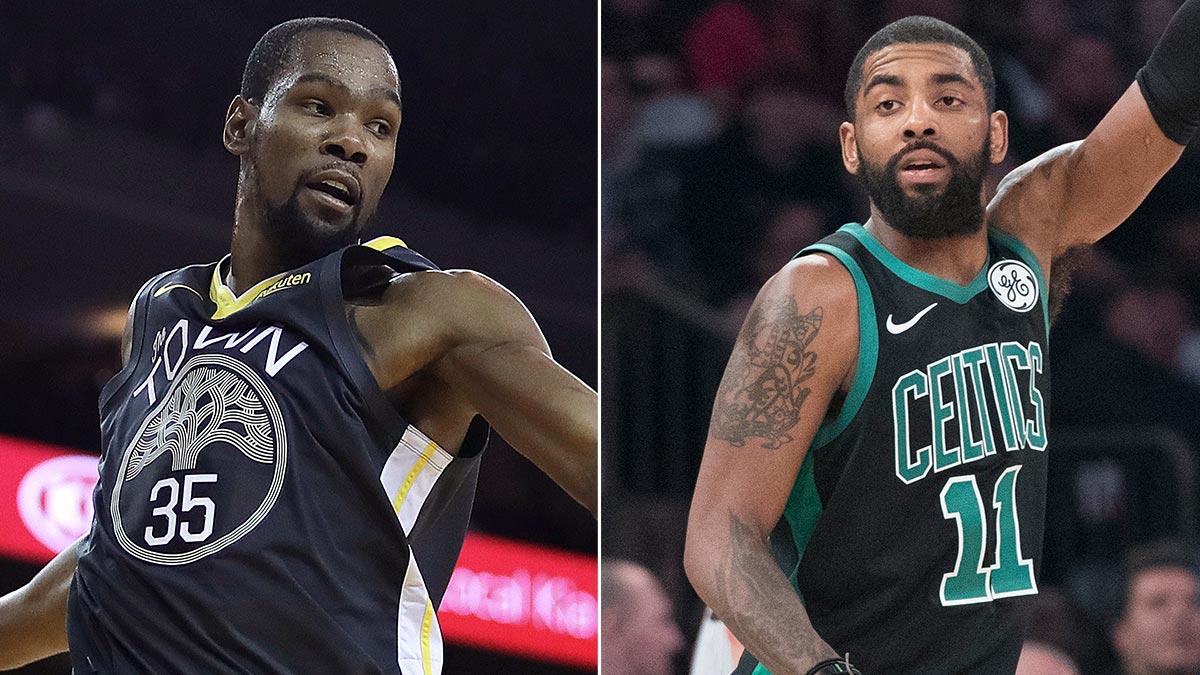 Just shut up and play.

Sometimes, work is the best distraction. That’s especially true when you unpack the 2018-19 NBA season. With the playoffs underway, one can’t help but breathe a cathartic sigh of relief in seeing a necessary pause to the full-blown off-the-court circus transpiring with some of basketball’s biggest names.

Arguably none larger than the man with whom Boston’s championship hopes are firmly situated: Kyrie Irving. Where does one even start with him? He has the cosmically misguided belief the earth is flat (it’s not), he lashes out at the media with regularity, and he just has a bad attitude in general. And, even though he embodies everything about the player you hate if he’s not on your team, Irving flips a switch when it’s basketball time and he tasked with making a big play.

In the Celtics’ 99-91 Game 2 win over the Pacers, Kyrie put up 37 points and 7 assists. After that, he, along with Gordon Hayword , provided huge minutes in a 4-game sweep of Indiana. Thus dismissing Reggie Miller’s former team from the Playoffs on Easter Sunday. Kyrie is the current in a storied line of polarizing Boston Celtics’ players, which includes literally everyone on the Celtics’ roster, if you ask Lakers fans And yet, he is merely one juicy NBA plum on a tree of intrigue this year.

The most succulent piece of produce is Anthony Davis, the centerpiece of a colossal trade fiasco. The 6’10 power forward and former Kentucky Wildcat apparently hates the New Orleans Pelicans. Maybe that’s why after he demanded his trade from NOLA, he proceeded to deny countless paying fans the opportunity to see the remarkably talented big man play.

Watching one of the greatest talents in the world ride the bench in the fourth quarter of every pivotal game, was disgraceful. Even more disgraceful yet, was the Lakers pitiful campaign to lure him to Hollywood.

Though his job title was merely for appearances, Luke Walton is out as head coach of “The Lake Show”. LeBron James, the team’s real coach and horrible boss, helped pitch a trade that virtually would’ve dealt the Lakers whole roster, including tentpoles Lonzo Ball and Kyle Kuzma. The Pelicans rejected that and every subsequent offer from House James, leading to the “Unibrow” sporting a stylish “That’s All Folks” t-shirt for what was most likely his final game as a Pelican.

No matter where he goes, LeBron drives people away. I’m not saying he’s toxic; but, Britney Spears could sue him for copyright infringement. So too, perhaps, causing L.A. to lose its Magic.

If all of this wasn’t enough, remember, these are the off-the-court plotlines. The playoff run unfolding before our eyes, could very well be the last for the vaunted Golden State Warriors.

How do I know?

Because Kevin Durant is set for free agency at the end of this season, he headlines another blockbuster free agency summer to come. Listen to this: with the New York Knicks sending Kristaps Porzingis to Dallas, it stands to reason that Spike Lee’s team intends to assemble its own big three, consisting of Kevin Durant, Kyrie Irving (also a 2019 free agent), and Zion Williamson, assuming New York wins the draft lottery. I lost an hour of sleep by simply typing that sentence. If this scenario comes to fruition, the Knicks will wreak havoc on the NBA next season.

But that’s next season. So, save the night terrors for around late-September. Right now, Brad Stevens is still in charge of Irving and his Celtics. They’re still contenders for the Eastern Conference championship. If they want to be in the playoffs well after Avengers: Endgame hits theaters this Friday, they’ll need a better comprehensive effort. Lock down on the perimeter and politely ask Al Horford to stop turning the ball over. If they do this, Horford and the Celtics will have their shot versus Giannis Antetokounmpo and his top-seeded Milwaukee Bucks in Round 2.

Neither Boston nor Milwaukee have lost this postseason. Coming off respective sweeps over their first-round opponents Indiana and Detroit. This is a rematch of 2018 when the Celtics and Bucks met in the first round. The Bucks are no joke this year and the Greek Freak has revenge on his mind from last year’s ouster. The Celtics have Herculean task in repeating their 2018 success.

The formula is simple: stop Giannis, stop the Bucks. And the way to that, is to limit turnovers. On average, the C’s take fine care of the rock, but turnovers inevitably lead to transition thunder-dunks. In which case, “Fear the Deer”. Ultimately, I like the Bucks advancing in a seesaw 6-game series, setting up a date in the East Finals with Philly.

But the Warriors still exist, so this year’s playoffs are a contest for runner-up. And yes, that’s despite Damian Lillard drilling an awe-inspiring, 37-foot buzzer-beater that erased Oklahoma City from the 2019 NBA Playoffs.

Steve Kerr and his Warriors are the dynasty of a generation, and any team intent on dethroning them, better bring more than merely buzzer-beating viral buckets.

Even with DeMarcus Cousins injured (again), The Bay Area will celebrate another Larry O’Brien Trophy. But, seismic changes loom on the horizon for the NBA landscape. Who will grab the brass ring and emerge as the league’s new dynasty? And, what elite challenger will rise to stop them? We’re about to find out.