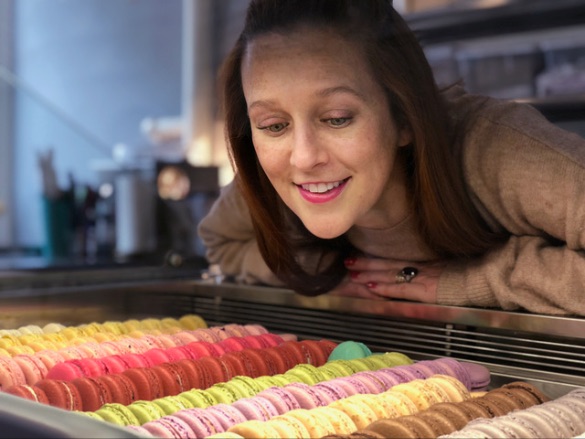 “I want to expand on French pastry concepts and bring them to the people of Quincy, Boston and beyond,” said Miam Miam owner Jennifer Turner, a veteran of the Boston restaurant industry. She has worked at acclaimed eateries such as Blue Dragon in Fort Point, Bin 26 Enoteca on Beacon Hill and the Chart House on Long Wharf.

Turner opened a Miam Miam retail shop in South Boston in 2015 and currently operates a pre-order-only business out of West Quincy.  The new Miam Miam retail shop will feature about 600 square feet of space with a small number of tables and chairs, a beverage menu including herbal teas, and displays showcasing a mouthwatering array of colorful confections, chocolates and pastries.

Miam Miam guests will find about a dozen different macaron flavors each day, including espresso, red velvet and orange blossom, plus weekly and seasonal specials, many of them displayed on Miam Miam’s spectacular macaron towers.

Miam Miam fans will also have a chance to enjoy Turner’s favorite French pastry, kouign-amman. The buttery, multi-layered cakes, typical of Brittany, were described by the New York Times as “the fattiest pastry in all of Europe.”

“Eating Kouign-amman is a life changing experience,” said Turner. “We will bring that delicious experience, and many others, to Quincy Center.”

Miam Miam will sit in the heart of a dramatically revitalized neighborhood. The Munroe Place building, which will be the home of Miam Miam, already boasts a diverse array of eateries such as Jenny’s House, Gunther Tootie’s, TBaar’s and Sher-A-Punjab. In addition to nearly two dozen new eateries, Quincy Center has recently welcomed luxury residential developments such as Cliveden Place and Nova Residences.

The gorgeous new Hancock-Adams Common opened in in late 2018, serving as a gateway to the city right next to Quincy Center station on the MBTA Red Line and commuter rail.  The community also just opened in early 2020 a $46 million, 712-car parking garage (about two blocks from Miam Miam). Quincy Center will also soon welcome the new multi-use 15-story high rise Chestnut Place, which will be one of the region’s tallest buildings outside downtown Boston.  Visit the Miam Miam website, or follow Miam Miam on Facebook, Instagram or Twitter.

Julie Fairweather - August 1, 2021 0
The 10TH MA location of the burger chain to celebrate grand opening  with a donation to Project Bread Following the successful opening of its Somerville (Assembly...