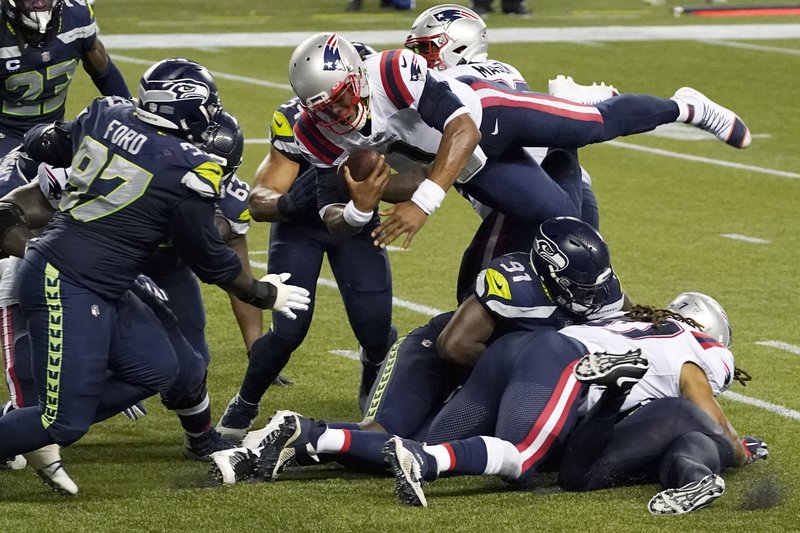 There are no moral victories in the NFL, but Sunday night’s Patriots vs Seahawks classic left New England with some significantly positive signs for their future. The 35-30 defeat showed that the Patriots offense can compete with the best units in the NFL and that despite no longer having Tom Brady the Patriots are still a threat to put up big numbers. New England was one yard away on the game’s final play from beating the Seahawks in Seattle. Nothing to sneeze at.

Cam Newton was sensational, throwing for 397 yards and rushing for 47 more while accounting for three total touchdowns. Most notably, once the Patriots got down 28-17 in the second half they opened up the attack for Newton to continue passing and he looked terrific. Despite one interception when he made a poor decision on an out throw to his left, Newton led the Patriots on two touchdown drives in the final 20 minutes of the game and came one yard short of a third touchdown. On the final play, the Patriots tried to run Newton into the end zone and Seattle made a terrific play. Sometimes that just happens.

The Seahawks defense is a strong unit and the Patriots were unable to muster much of a rushing attack, which put the game in Newton’s hands. He responded by going toe to toe with Russell Wilson, who himself looks like the league MVP. Perhaps most impressive was Newton’s work on third down, in which he was 6-6 for 74 yards and five first downs while taking one sack.  Julian Edelman set a career high in receiving yards with 179 and N’Keal Harry had one of his best games as a Patriot with eight catches for 72 yards. Damiere Byrd also had 72 yards receiving including some clutch work on third down.

The normally stout Patriots pass defense was torched by Wilson for five passing touchdowns. There is no denying that the Patriots defense has to be better for the team to win, but the Seahawks also pulled off some plays that only a handful of teams in the league can make. And they did it more than once. Wilson’s long touchdown to D.K. Metcalf saw the league’s best corner, Stephon Gilmore, get beat initially but recover to get a hand inside Metcalf’s arms. Metcalf caught it anyway for a huge touchdown.

Wilson’s throw to David Moore for their 38-yard touchdown connection was even more impressive. With Jason McCourty draped all over him, Moore caught a perfect pass and landed backwards into the pylon for the score. The last two Seattle touchdowns were great play designs that would have fooled pretty much any defense seeing them for the first time. The Patriots did have a pick-six on the first series on the game and forced two late Seattle punts to keep New England close, so the performance wasn’t all bad. The biggest positive for Patriots fans is that the defense is much closer to what they showed against Miami than what they showed against the Seahawks.

A loss is a loss in the NFL and the Patriots don’t get to be 2-0 because they came close to winning. But the fact remains that the 1-1 Patriots showed that they are capable to hanging with the NFL’s best. Seattle deserves immense credit for making more plays than the Patriots, but New England heads into Week 3 with some key questions answered.