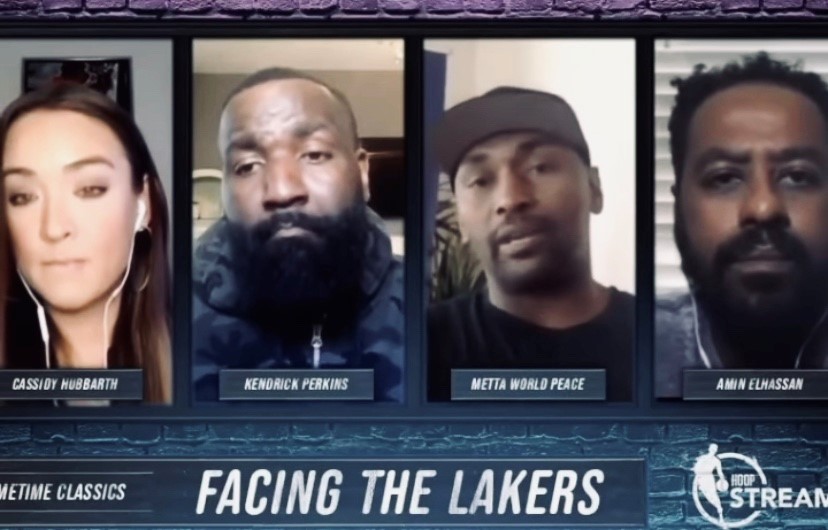 Kendrick Perkins will be remembered around the TD Garden forever, having helped the Celtics win their first championship in over 20 years back in 2008. Perk did it all over his 15 year NBA career, and has since transitioned to the media, becoming one of the most well-known voices on ESPN.

In today’s uncertain times, Perkins is reflecting on the positive things that have emerged during these unprecedented times. “It makes you appreciate everything that you have on a daily basis,” Perkins said about the pandemic. “You’re able to have family time, being with your wife and your kids, and not take certain things in life for granted, not just with sports, the simple things like going to the gym and working out and going to grocery stores, it puts life in perspective.”

Perkins has been working on the show Hoop Streams, a digital pregame show that has been rapidly gaining popularity over the past year. His preparation however for the show has gone mostly unchanged due to the coronavirus. “It’s still the same, approach it like you do any other show, you make sure that you’re putting out great content,” Perkins said. “You want to make sure you’re crossing your T’s and dotting your I’s.”

Perkins also spoke of how hard the entire show works to produce the content that they do. “I think that the whole Hoop Streams family does a great job of preparing,” Perkins said. “Max (Kelley) is the producer, and Cassidy (Hubbarth) is the host she does a great job, you got Amin (Elhassan), he comes in prepared, we keep pushing out great content, and doing things the right way.”

When speaking about show host Cassidy Hubbarth, Perkins spoke very highly of her basketball knowledge which is part of what makes the show as successful as it is today. “She’s one of those who does her research, does her studying for her craft and it’s great,” Perkins said. “She’s a basketball mind and she actually played the game of basketball, she knows her stuff so I think that’s what gets it going, it’s always been a good connection, that’s what I think makes Hoop Streams, it started last year in the playoffs, and the Finals really is where we took off.”

For those who questioning why I’m doing so much TV, am I not supposed to evolve?
I gave the game 19 years of my life on the court. So, I’m going to analyze, reflect upon and voice my opinion and have fun with it every chance I get!
I appreciate all the Love and Conversations!✊🏾

Not many people who watched Perkins play thought he would end up having a career in the media, and as it turns out neither did Kendrick himself. “I never did, and it’s crazy because I always wanted the next coach of an NBA team that played center,” Perkins said. “Big guys don’t get enough recognition for knowing the game of basketball and I wanted to be one of those first guys to be a head coach in the league, so I started creating a platform for getting my voice out there, to get my knowledge of the game out there. But all of a sudden, it turned into my joining the media, and I started to take a liking to it and know I love doing it because that’s what I do anyway is watch sports, watching basketball, and being able to go and talk about it the next day is right up my alley.”

When asked about his inspiration and people who looked up to in the broadcasting world, there was no shortage of people from multiple sports. “You look at Charles Barkley, he has this unique way, he’s always been himself, he doesn’t try to change, he has a different delivery, he’s a country boy, everything about him is different, Emmy award winner, stuff to that nature,” Perkins said. “Then you look at a guy like Stephen A (Smith), very intelligent, speaks with a lot of knowledge and brings a different personality. You look at Marcus Spears, country boy out of Louisiana, he has a different thing to how he approaches it, but he still speaks with knowledge, so I just try to take bits and pieces from every person and try to put it all together and try to develop my own approach because you got to keep learning.”

In terms of how the NBA is figuring out a solution on how to handle the suspended season, Perkins admires the leadership on both sides finding a solution. “I’ve always been a fan of Adam Silver, I think he’s the best commissioner in the world,” Perkins said. “And I’m really a fan of the leadership of Chris Paul. The way he’s handling the Players Association right now is remarkable. I love how they are going about it, it’s a discussion, it’s all we can ask.”

On whether the NBA season should continue, Perk thinks the opinions for both the players and the owners is pretty universal. “I think the NBA season will resume, practice facilities are opening, guys are going in and working out, and the players want to play,” he said. “The owners want the players to play, so I see it happening.” Perkins mentioned the UFC and how they have been running events with no fans, and believes that the NBA could potentially build off those ideas in order to make up for lack of crowds.

Perk offered up his prediction of how he saw the NBA Finals shaping up before the shutdown. “Toronto Raptors and Los Angeles Lakers,” he said. “The Lakers were going to take it home, reason being that they not only have one of the greatest players of all time playing at a extremely high level at age 35 in LeBron, but they have Anthony Davis, a generational talent, arguably the best two-way player in the game,” Perkins said. “They’ve got the best duo since Kobe and Shaq, and the Lakers were just hitting their stride, the role players were playing at a high level, they were playing championship basketball before the pandemic started. And they’ve got the most championship experience when you look at it. Rajon Rondo, Quinn Cook, Javale Mcgee, LeBron James, Danny Green, and even Dwight Howard. Those guys are a great veteran team, leadership like Jared Dudley in the locker room, so I really think those guys win a championship this year.”

While many people think it’s a surprise having the Toronto Raptors going all the way to the Finals — this writer included — Perkins thinks it’s more likely than people may realize. “The Raptors have the coach of the year in Nick Nurse, they have a great star who’s proven in Pascal Siakam who’s performed on the biggest stage last year and performed at an elite level, All-Star starter, then you have the heart and soul, Kyle Lowry,” Perkins added. “They are deep, when you go down their roster, Serge Ibaka, Marc Gasol, you got Normal Powell who arguably could of won 6th man of the year this year, and you look at them and nobody expected them to be No. 2 in the East but I did, I didn’t count them out.”

When looking at recent Celtics history, Perkins was a key factor in the 2010 Finals. The Celtics had a 3-2 series lead against the Lakers when Perkins went down with a torn MCL and PCL. Celtics fans sadly know the rest of the story, as the Lakers came back and won a back-to-back championship. If Perk stayed healthy however, he thinks it would have gone down much differently. “Oh yeah we win for sure,” he said. “Our starting five, healthy never lost a playoff series, in a team sport, each piece matters. It’s demoralizing when someone goes down, you know me and KG we had a tandem, and you go back to Game 7, we asked KG to do a lot, he was down there battling with Bynum and Gasol, and we had to move him to the center position and he was kind of tired, at the end of the day when I think about it, we never lost a playoff series, we had one of the best defensive teams in NBA history.”

You can’t mention those Celtics teams without Ray Allen and his decision to join the Heat. The tension with the Celtics and Allen has been apparent for years and the storylines popped up again with Kevin Garnett’s number set to be retired for the Celtics next season. Perkins believed Allen should make the effort to go back into the Celtics fold. “I think Ray’s number deserves to go in the rafters, but that’s something Ray is going to have to hash out,” Perkins said. “He deserves to be in the rafters, he was a key piece, without Ray, there is no Big Three, just like without Paul there’s no Big Three, without KG, same thing, hopefully time will heal those wounds and we can move forward, but Ray’s number should be retired in Boston.”