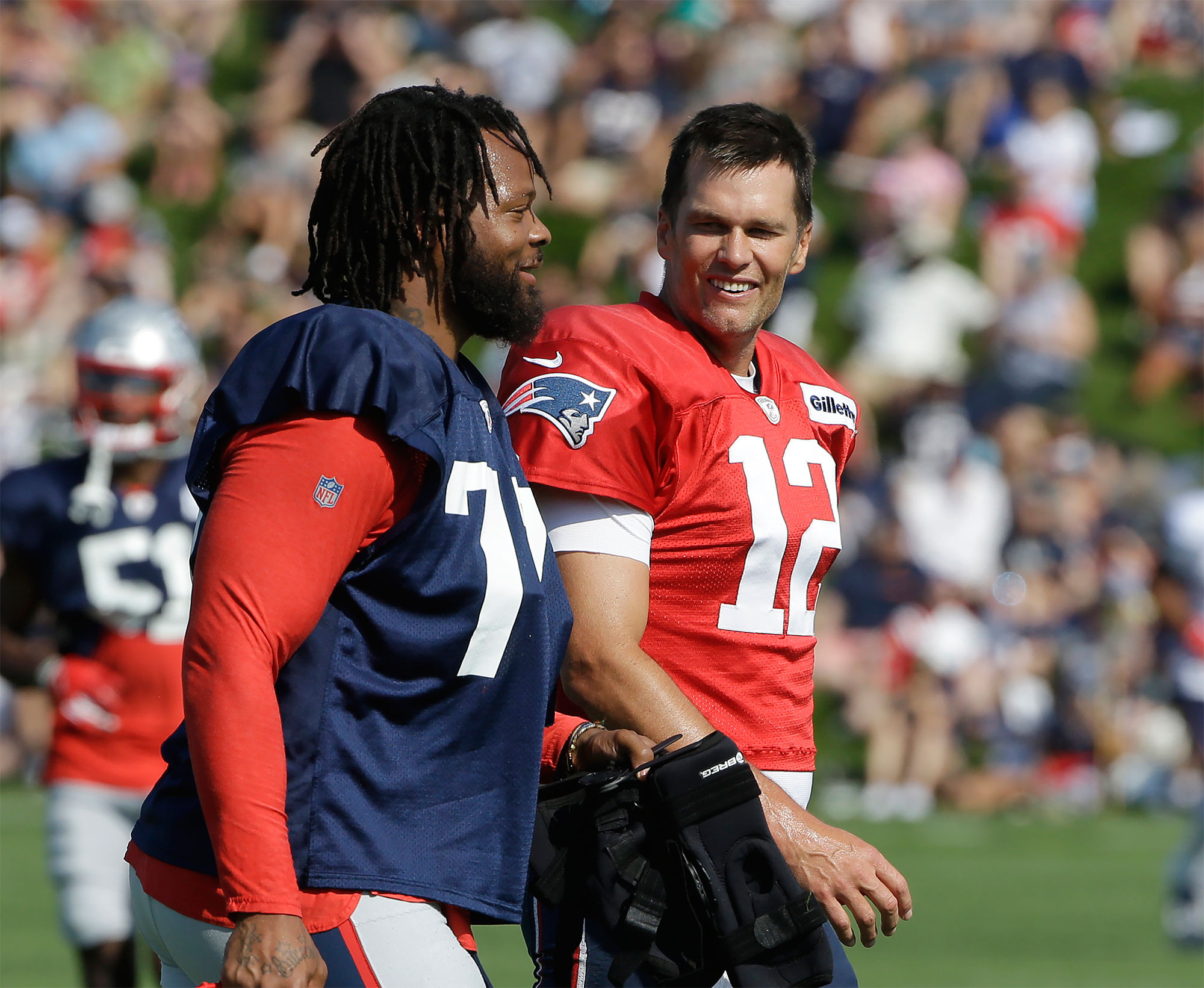 The NFL offseason is objectively terrible, demanding its fans wait nearly seven months from the end of the Super Bowl to the start of the preseason. But, the wait is almost over. Sure, you have the draft in April; but in reality, that’s a one-night diversion for all but the most diehard fans. So, we fill the gap with greenery—both on the golf course, and on the diamond. Listen, baseball is one of my favorite sports. And, as a Cubs fan, my attention is locked in on a sizzling race for the NL Central pennant.

Here in Boston, however, even with the Red Sox in contention (barely), you’ve probably been counting down to football since about mid-May. Marking red “X’s” on your calendar like a child awaiting Christmas morning. Home playoff games at Gillette Stadium ring synonymous with routine in most years. But, this season the Patriots arrive with a storied legend at quarterback, who no longer has a tight end to throw to.

New England doesn’t rebuild, it reloads. So, the notion of appearing in the postseason as a Wild Card (or perhaps not at all) is foreign to supporters in this area. But, it very well could happen. And if it does, rest-assured it’s because the NFL is better now than in most years in recent memory.

That’s simply one, titillating storyline unfolding right before our eyes, but league-wide, wholesale sea changes are shifting into place, promising a fall full of more palpable intrigue than an episode of Serial.

So, come with me as I dissect the reversal of fortunes in cities like Cleveland, Oakland (Las Vegas), New York (Jets), and Chicago. Then, I’ll examine the Chiefs and Ravens, two teams led by phenom signal callers, poised to take over the AFC and usher in a new era of football. After that’s done, we’ll do our best to decide whether an 18-game regular season is a good idea. As of matter of fact, I’ll take that one right now: it’s not.

By now, you’re ready for much more than merely some football. So, here we go.

When it comes to the NFL, you’ve got tiers, echelons, if you will, that teams reside in. There are evergreen franchises such as Dallas and Green Bay. Proud teams with obscenely proud fan bases. They’re kept honest by perennial contenders in the Pittsburgh Steelers—a team constantly trying to scrape the highest ceiling.

The Lions and Browns wear those other teams’ pajamas to bed. Well, the Lions do at least. The Browns? John Dorsey has seen enough and his club is about to bring seismic shifts to Northern Ohio and the rest of the NFL.

How and why, you ask? Because Cleveland pilfered Odell Beckham Jr. from the Giants and added Jarvis Landry from Miami. Thus giving the young, promising Baker Mayfield explosive and playmaking targets in the passing game. First-string running back Nick Chubb and the ever so controversial Kareem Hunt will provide the offense balance on the ground.

With Cleveland, the trick comes in usurping power from AFC East stalwarts Pittsburgh and Mike Tomlin’s new-look squad. All they have to do this year is replace two future Hall of Famers in Le’Veon Bell and Antonio Brown. Enter wide-receiver JuJu Smith-Schuster and running back James Conner. Both need to majorly step up if Big Ben’s crew is to hold off the upstart Browns.

Both players were late-season fantasy pick-ups, Smith-Schuster accumulated over 1400 yards, while Conner fell just shy of 1000 yards rushing with 12 touchdowns in 2018. Let’s see if they can do it again for the whole year—this time as the main weapons with considerably more parity from the outset. Bottom line: the talent is spread out across both conferences, both previously established and later formed in the offseason free agency cycle.

Brown provides a dynamic element to Jon Gruden’s slow-burn Raiders, while Bell bolsters Sam Darnold and the New York Jets: one of the most title-starved franchises in the NFL.

Despite a bevy of shiny new toys splashing onto the scene this season, let’s not forget our established contenders, teams like Kansas City and Chicago. Two clubs with one shared goal in mind: get to Miami and Super Bowl LIV.

Take note of all these storylines. Because as per usual, the game itself serves as an antidote to Roger Goodell’s continued nonsense. How does this manifest itself? Oh boy, there are a plethora of examples to cite; but, let’s examine the two hottest ones this moment.

He still has virtually no idea how to discipline his players, and that’s a real problem. Since the reprehensible Ray Rice incident, domestic abuse matters remain a plague upon the NFL, grabbing hard news headlines that the commissioner would obviously rather see dissolve with haste.

Goodell is the leader of America’s most popular professional sports organization. He bears the responsibility of looking after his players by instituting sound policies. Consider for instance the proposed 18-game season.

Most fans would happily welcome more football. But, what will come of the evolving concern regarding player safety? How would adding two more games to the regular season help reduce players’ fear of CTE and early retirement? It wouldn’t. That’s like trying to cut the sweetness of an ice cream cone by dipping it in Splenda.

Fans merely want to savor the joys of Sunday. Football is a fun sport. But, it’s also a complicated one. So, it takes sure-handed leadership in order to keep it thriving.

The wait is almost over, America.  A time-tested love affair with a sport begins anew, bringing along all the domestic beers and chipotle jalapeño bratwursts you could ask for. I know your patience wanes; I mean we literally have a show called NFL Countdown. Take solace in the fact that this season, with all its plotlines, will pack more punch, more wallop and more pass interference than we’ve seen in a long time.