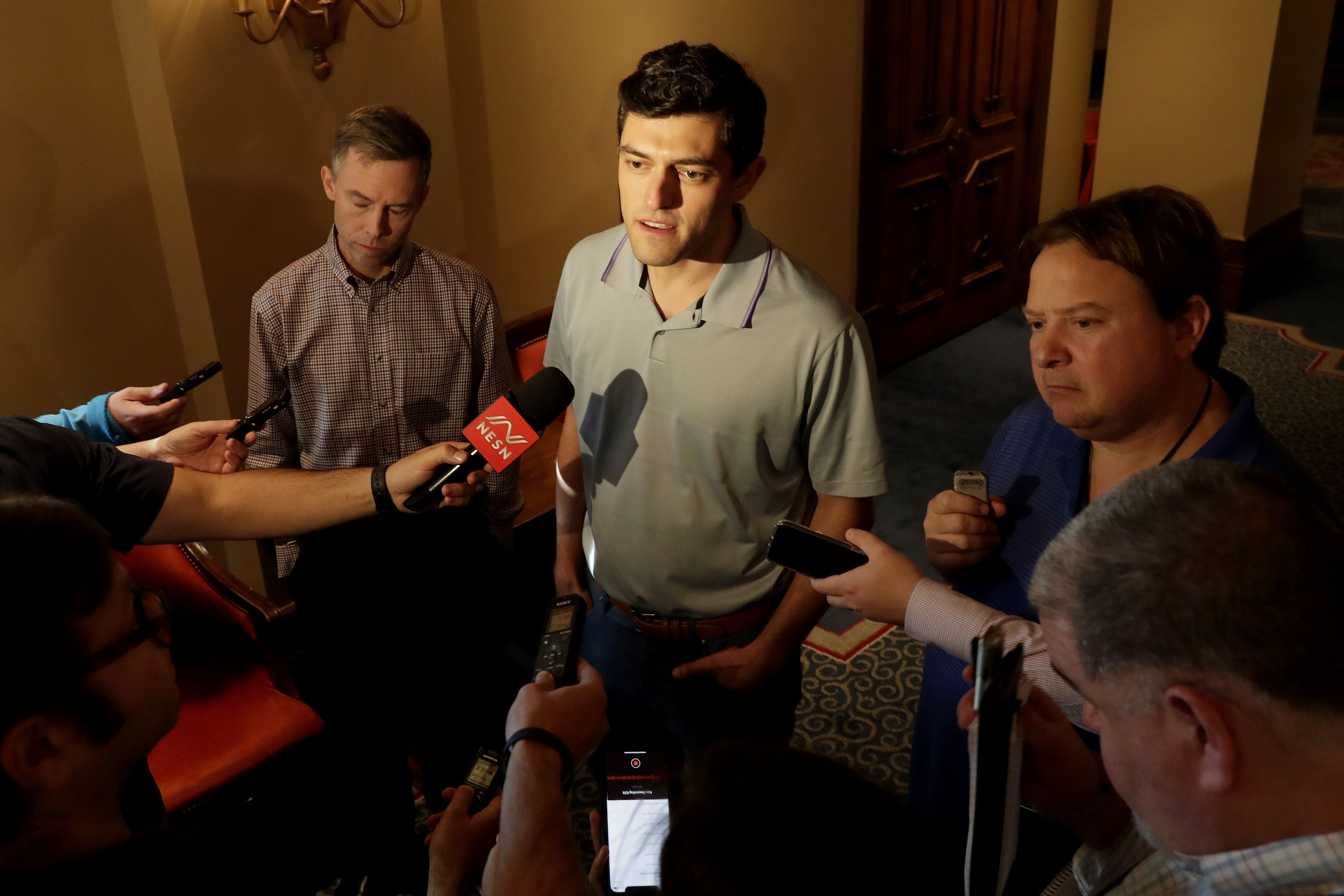 It was October of 2003, Game 7 of the ALCS. The Red Sox had a three-run lead in the eighth and were grinding it out for the pennant in the old Yankee Stadium.

Everyone knows the rolodex of missteps that ensued—Grady Little inexplicably left Pedro Martinez in the game, and the Sox blew the three-run lead then in the bottom of the 11th inning, Aaron [expletive] Boone took a Tim Wakefield knuckleball over the left-field porch.

I sat in a rocking chair in a near-catatonic state for four hours after that game, wondering if I’d be weaving baskets for the rest of my days.

But then something else happened.

The Hot Stove got cooking. On Thanksgiving Day, Red Sox owner Dr. Creepy and the wonderboy GM Theo Epstein flew to Arizona to dine on turkey and stuffing with Curt Schilling’s family and convince an aging but still-relevant pitcher to come to Boston.

In the press conference announcing Schilling as a Red Sox, Mr. Future-Bloody Sock said all the right things, notably, “I guess I hate the Yankees now.”

Ah, nostalgia. Remember when the Hot Stove would sate fans’ need for baseball during the long insufferable New England winters?

Fast-forward 16 years, and here we are listening to the new Chief Baseball Officer (apparently General Managers aren’t a thing anymore) Chaim Bloom—a name straight from a James Joyce novel—spew a scripted litany of non-committal decisions regarding the future of the team.

Listening to Bloom is like sitting in a lecture hall with an economics professor reading from his own book. Blah, blah, blah, blah, ba-blah. And still we know nothing of his vision for the team moving forward.

The Blah Sox may or may not deal their homegrown superstar Mookie Betts, who has made it clear he’s unhappy in Boston and itching to test the free agent market next year, where Betts will likely command a Troutian contract.

Without Mookie, perhaps the Sox most electric draw, there’s one less reason to truck out to Fenway, hemorrhaging cash on exorbitant ticket and concession prices.

That’s not even the best part.

Did I mention that the front office also announced to fans that, while cutting payroll, they’ll be increasing ticket prices. So here’s something else we learned from the Blah Stove: Fans will be paying more to watch an inferior product.

Additionally, the Red Sox have another potential problem that may or may not affect fans’ perception of the product. Manager Alex Cora is now being implicated for his seminal role in 2017 World Series Champion Houston Astros’ nefarious technological sign-stealing scheme when Cora was the bench coach.

Is it out of bounds to assume the same perfidious tricks were used at Fenway Park during their historic 2018 World Series run?

Maybe I just have sand in my pants. Maybe I’m so disheartened by the collective indifference from the 2019 Red Sox that I’m looking for things to complain about. Maybe I’m getting old and realizing that the game of baseball might have an expiration date with the new generations.

Or maybe I’m just waiting for someone in the organization to come forward and convince me that the team is more than some sterile economic and mathematical equation. That’s there’s something there worth our time and passion.

Or just maybe Blah Sox have left me with a bad case of the winter blahs.