In a contract arrangement between the Brown-Forman Corporation and Churchill Downs that has lasted more than 18 years, the Early Times Mint Julep Cocktail has been the designated “official mint julep of the Kentucky Derby,” although the Early Times sold within the United States is a Kentucky whiskey, not a bourbon.

Since 2006, Churchill Downs has also served extra-premium custom-made mint juleps at a cost of $1000 each at the Kentucky Derby. These mint juleps were served in gold-plated cups with silver straws, and were made from Woodford Reserve bourbon, mint imported from Ireland, spring water ice cubes from the Bavarian Alps, and sugar from Australia. The proceeds were used to support charitable causes dedicated to retired race horses. Woodford Reserve and Early Times are sister brands produced by Brown-Forman, and under the terms of its current marketing agreement with Churchill Downs, Woodford Reserve is called the “official bourbon” of the derby.

In May 2008, Churchill Downs unveiled the world’s largest mint julep glass. Churchill Downs, in conjunction with Brown-Forman, commissioned the Weber Group to fabricate the 6-foot (1.8 m) tall glass (7.5-foot (2.3 m) if the mint sprig is included). The glass was constructed from FDA food-grade acrylic, heated and molded into the shape of an official 2008 Derby glass. It had a capacity of 206 US gallons (780 l; 172 imp gal), and distributed the Early Times mint juleps at the Derby with an elaborate pumping system concealed within the “stir straw.”

Recently, Urbandaddy.com published the best places in Boston to enjoy a Julep drink during the Derby. Here is the published list. For more info go to www.urbandaddy.com

In a few short days, tiny men will ride spectacularly named horses while people in giant hats watch. Don’t think about it too hard. Just make sure you’re holding a first-rate julep when the moment comes. Now, where would you ever find one of those… 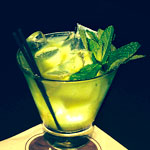 Southie Julep at Stephi’s in Southie

The Julep: They’ll have standard juleps aplenty. And if you ask for it, an off-menu variant made with Irish whiskey, brown sugar simple syrup, vanilla, lime and mint. So ask for it.
The Scene: Southern delights like ham-and-biscuit sliders and bourbon pecan pie. And a horse race, or so we hear. 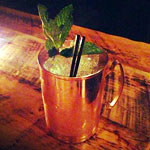 The Prescription Julep at Ward 8

The Julep: Bourbon, sugar and a mint sprig. Oh, and cognac. That last part’s important.
The Scene: Four derby-screening TVs behind a wraparound marble bar. So there shouldn’t be a bad seat in the house. Unless the hat situation deems otherwise. 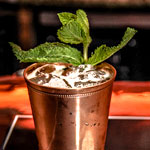 The Bee Sting Julep at Parla

The Julep: One made with their house-infused habanero whiskey, so it’s… well, we won’t drag this out. It’s really f**king spicy.
The Scene: A closet-sized speakeasy with plenty of brown liquor but no TV. Don’t worry, though. They’ll just announce the winner out loud. You also have a phone, by the way. 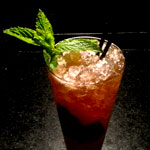 The Sicilian Julep at Highball Lounge

The Julep: House amaro with ginger beer, raw sugar and fresh mint in a highball glass. You won’t find it on a menu. But ask and you shall receive.
The Scene: An attic-like cocktail den with a flat-screen they only turn on for special occasions. This just might qualify. 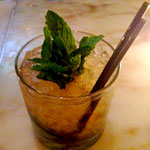 The… Mint Julep at Eastern Standard

The Julep: Simply bourbon, sugar and mint on the rocks. No horsing around. Our lawyers made us make that pun.
The Scene: A dapper crowd of folks wearing their Derby finest and acting on their best behavior. At least until the Sox game lets out.

Look for Harry to jump forward