Monday, Monday, can’t trust that day … because it could still be Sunday or maybe it’s Wednesday. Keeping track has become a challenge. Despite the day fog, and the brutal weather, there are some bright rays of light to look forward to and we are here to tell you about them. But there are things to look forward to.  Like …

Pink Taco in Boston’s Seaport district has always created a buzz with their epic food, great drinks and kick ass atmosphere.  We enjoyed covering the new venue last fall (see above report). Now, during the Coronavirus crisis, they are at it again with awesome offers to take out!  At Pink Taco, their mantra is to keep things real … they make epic food, great drinks and provide an incredible experience all in pursuit of a kick ass good time! Realizing now is not the best of times, Pink Taco is hoping that tacos can help add some cheer to your quarantined days!  So they are offering $10 off every order of $35 or more of take out tacos! 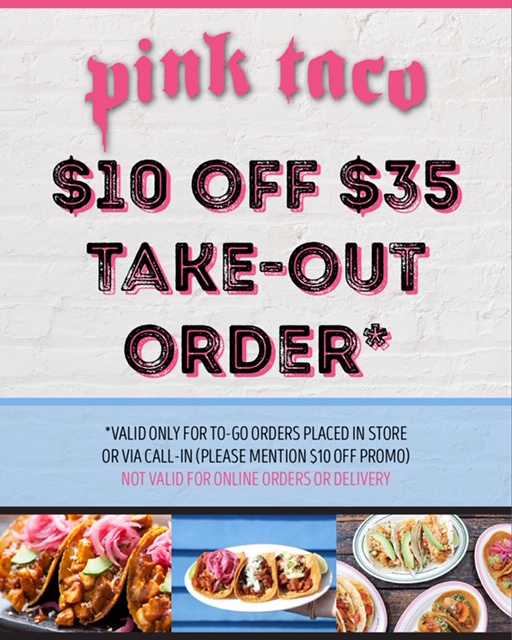 Just a little something to look forward to and help you get through another gray and rainy March day here in Boston.  We love their innovative made from scratch Mexican dishes that use the best farm-fresh, local ingredients and we think you will too!  Tomorrow is Tuesday … aka #TacoTuesday … have some fun Boston. 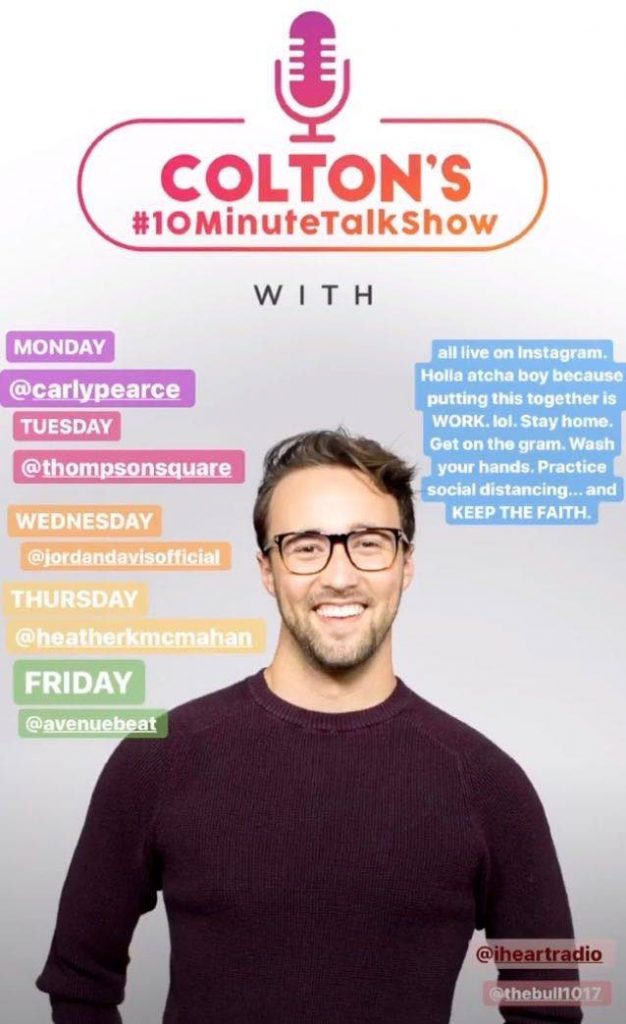 Local TV & radio personality Colton Bradford hopes to break up your coronavirus doldrums with some special guests for a bite sized break in the day. Last week he launched his #10MinuteTalkShow on Instagram to give people a bright spot in their day and admits that it has given him something to look forward to in all of this craziness. It’s just quick enough to take your mind off of everything, if you missed last week’s 10 Minute Talk Shows … make sure to tune in this week. Colton encourages you to engage in the comment section below the live show and ask questions if you like. “This is just to be a quick break in your day to hang and get your mind off of everything,” says Bradford. “The news being relayed is important, but staying connected and keeping some faith is important too.”  Follow Colton Bradford @iAmColtonBradford and @TheBull1017.

https://www.instagram.com/tv/B-N6iG3DwQQ/
Post Malone and his good bud MIKE – formerly known as Mike Studd – announced this weekend that they have recruited a stellar line up of their celebrity pals to participate in “The Ballina Cup,” an eight-day beer pong tournament that will be broadcasted online on Instagram @theballinacup.  Its being called “The March Madness of Beer Pong” Celebrity Beer Pong Tournament and promises to provide more details to come soon!! 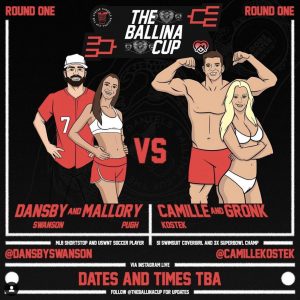 Round One pits Gronk & Camille against Dansby Swanson & Mallory Pugh.

The online beer pong tournament event will feature 16 teams with big-name players like Danny Amendola, GRONK and gal pal Camille Kostek, MLB pitchers Trevor Bauer and Mike Clevinger, Johnny Manziel, Machine Gun Kelly, Kansas City receiver Travis Kelce. Each celebrity ponger will participate from their homes via Instagram Live over eight days. The tournament kicks off next week, exact dates TBD, with two games happening each night. The winning team will walk away with a trophy, while others will receive wrestling belts and chains.
The tournament has even caught Las Vegas’ eye, according to gambling site SportsBetting.ag, NFL player Danny Amendola favored to take home the beer pong trophy, belt and chains. However, the two-man team of Post Malone and MIKE have the second-best betting odds. 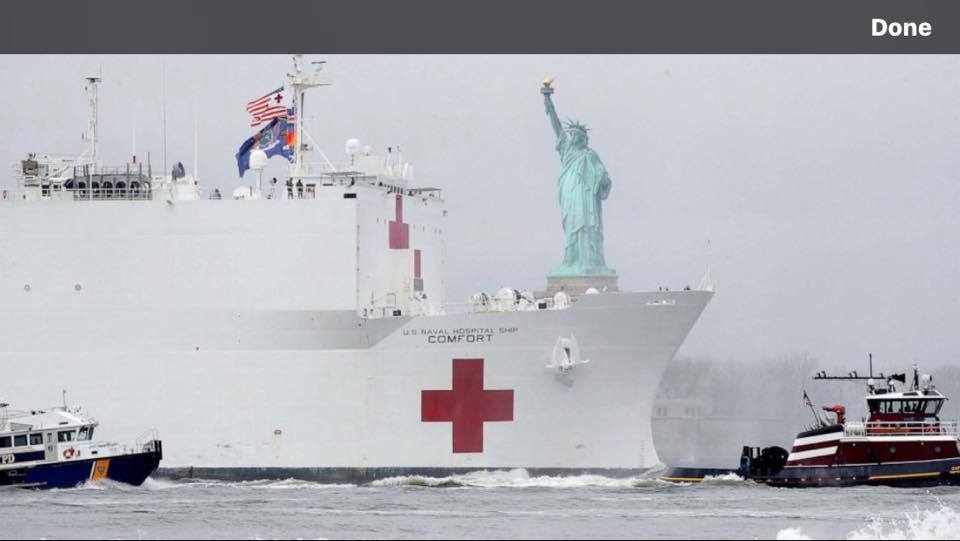 The floating hospital will be used to treat non-coronavirus patients to free up space in city hospitals.

The USNS Comfort, a Navy hospital ship with 1,000 beds, 12 operating rooms and a full medical staff, arrived at Manhattan’s Pier 90 this morning. The floating hospital will serve as a relief to NYC’s currently overwhelmed hospitals as they take care of the onslaught of Covid-19 patients during this unprecedented crisis.  The ship will be used to treat non-coronavirus patients to free up space in city hospitals. The ships’ personnel are trained for combat casualty care and do not treat contagious diseases like the coronavirus. The USNS Comfort, a Navy operated hospital ship, arrived into New York Harbor on Monday from Naval Station Norfolk in Virginia and will begin treating patients on board as soon as tomorrow, Tuesday, March 31.
5. TREY KENNEDY
https://www.facebook.com/428459670594043/videos/2788450034605894/
If you have yet to discover Trey Kennedy … then you are one of the 5 people in the world who’s outta the loop  Regardless, he’s funny and you need him in your quarantined life.  That is all.
https://www.facebook.com/treynkennedy/videos/505419220343823/
He recently launched a youtube series based on his middle school alter ego called Middle School Maddox. Maddox, age 11 (and a half), must complete his mother’s strenuous to-do list to earn his videos games back in time for his tournament. Can he do it (with a good attitude)?  We doubt it.  Tune in.
6.  KUDOS TO BETHENNY FREAKING FRANKEL
https://www.instagram.com/p/B-X2v7-AcdX/?utm_source=ig_web_copy_link
NYC Hospitals were in dire need of protective gowns, masks and more.  So she set out to get one million biohazard water resistant full body protective suits – and she got them – 22 trucks just delivered them to the NY Department of Health. She’s not stopping there. Now she’s looking for face masks and other supplies. You can help her get the job done by donating on her Instagram page @bethennyfrankel.  You know she gets the job done.  So it is definitely money well spent.
7. “NEVER RARELY SOMETIMES ALWAYS” COMES TO YOUR SOFA THIS WEEK

NBCUniversal has announced their specialty film label Focus Features’ latest title Never Rarely Sometimes Always, an urgent and poignant drama, will be re-released at home on demand for viewers this Friday, April 3rd. The film had originally opened theatrically on March 13th.  Eliza Hittman’s critically acclaimed, multi award-winning film will be available to rent at participating on-demand services for $19.99.
After premiering at the Sundance Film Festival and walking away with a Special Jury award, Never Rarely Sometimes Always went on to win the Silver Bear Grand Jury Prize at the Berlin International Film Festival, and currently holds an acclaimed 99% Certified Fresh rating on Rotten Tomatoes. The title is the second from Focus Features to take this model, along with Autumn De Wilde’s reimagining of Jane Austen’s classic Emma., which was available on demand along with Universal’s The Hunt and The Invisible Man on March 20th.  Joining these previously released films on April 3rd, Never Rarely Sometimes Always will be available on demand for a 48 hour viewing period.
Written and directed by Eliza Hittman, the film is an intimate portrayal of two teenage girls in rural Pennsylvania. Faced with an unintended pregnancy and a lack of local support, Autumn (Sidney Flanigan) and her cousin Skylar (Talia Ryder) embark across state lines to New York City on a fraught journey of friendship, bravery and compassion.