Hidden Gems of Charlotte — What to Eat, Drink & See!

As a UUUGE Boston sports fan, being away from Beantown during the Bruins battle for the Stanley Cup had the potential to be traumatizing. I knew before I even bought my plane ticket to Charlotte that I would need to find the absolute BEST sports bar to watch the Bruins and the Blues face off in Game 6. After extensive research, I found that Murphy’s Kitchen & Tap had nothing but glowing reviews online and seemed to be the move. 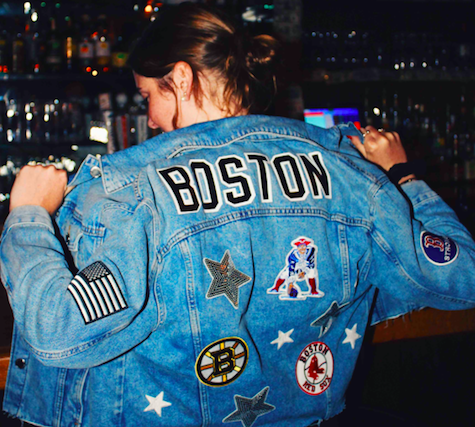 I had my expectations, I knew it was going to be a good sports bar, but my expectations were beyond exceeded. It would be rude and wrong for me to define Murphy’s dishes as bar food, because they were just way too fricken good! 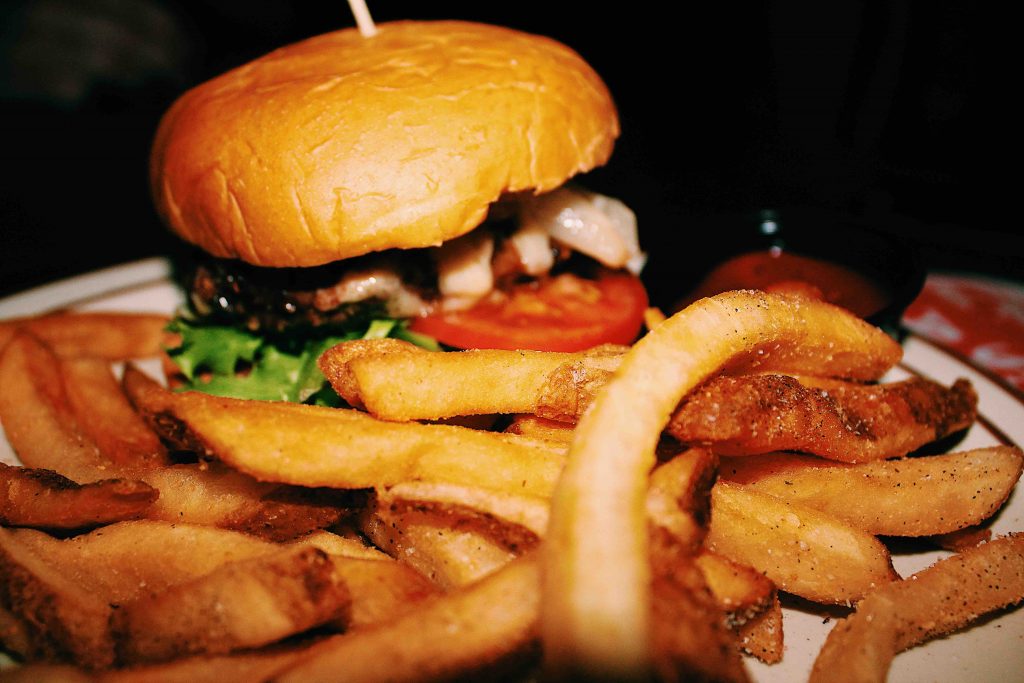 All of the ingredients are made fresh in house, from scratch each day. The proof was in the pudding. The food quality at Murphy’s was leaps and bounds beyond the standards of normal bar food and we did not need to order anything fancy — just some salads and burgers — but this meal stands to top the list as one of the better bites on the trip. 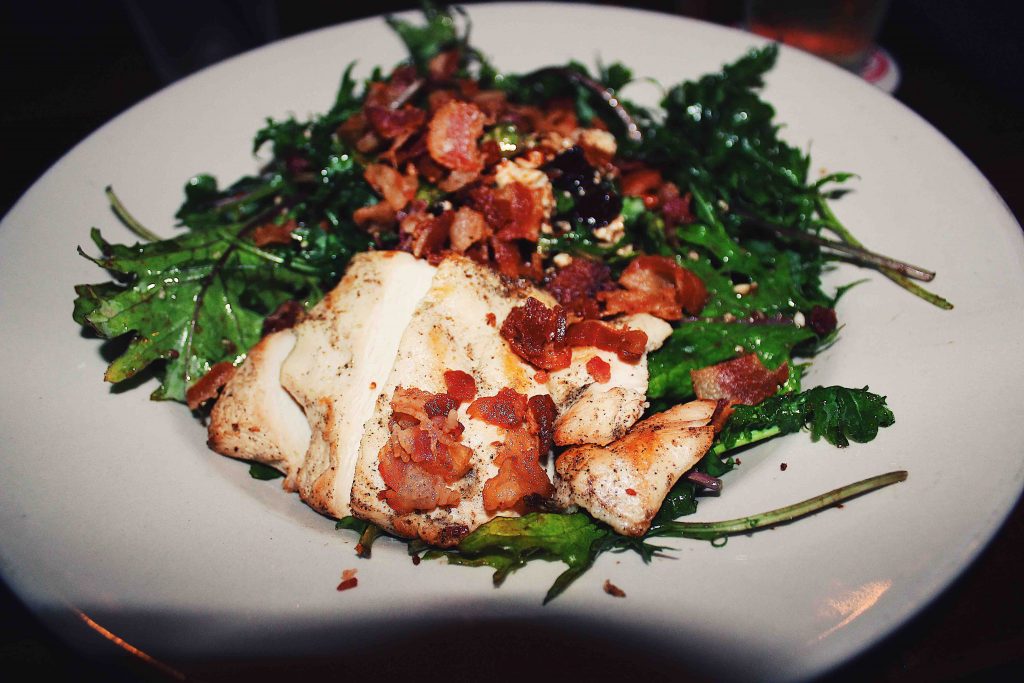 On top of the incredible food, the cold beer on tap, and an incredible mix of what feels like a New England/Ireland love child, the owner “Murph,” a die-hard Boston sports fan from Ireland, added an amazing energy to the place. We had the privilege of not only dining with him over a Game 6 Bruins Stanley Cup Finals game, but also got the opportunity to celebrate a win with him on his birthday. 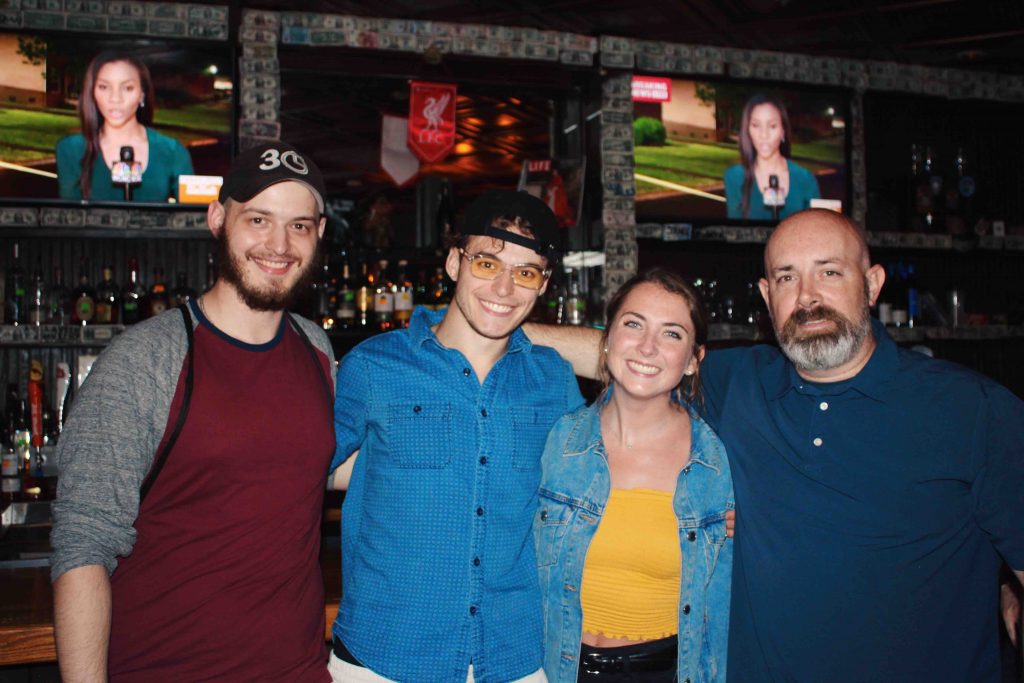 There’s no doubt that Murph’s energy and passion for good food and entertainment trickled down to his employees. We were not only accompanied by Murph, but were constantly checked in on by some of the waitresses and bar backs who all shared the same love of food and sports. When I first decided on Murphy’s Kitchen & Tap, I knew that I was going to find a place to watch the game. But I didn’t just find a place to watch the game. I found a place that felt like home.

Charlotte is known for their extensive list of breweries, so I wanted to make sure I visited the very best one. The NODA Brewery is a unique “microbrewery” that offers various small-batch craft beers that are all brewed right in house. Personally, beer is not my jam.  I love me a nice glass of wine, or even a cold cider, but usually beer is not my go to. However, NODA beer is not normal beer. The unique flavors of each brew worked together to create one of the most delicious, full, fresh beverages that I have ever had. 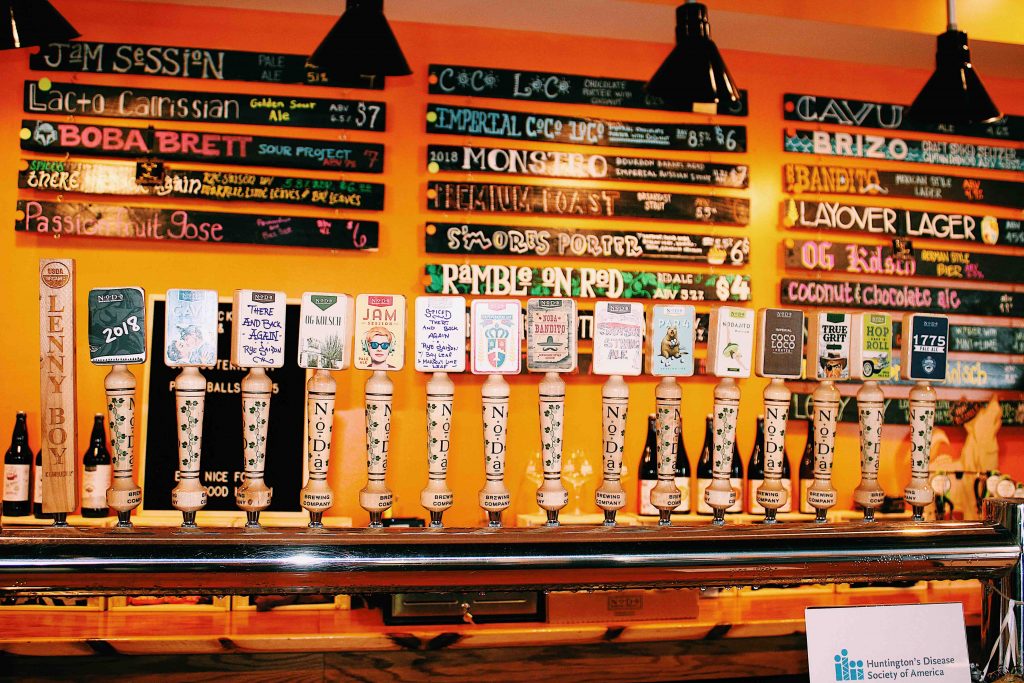 We decided to get a flight so that we could try more than just one or two beers. We picked out our 4 favorite sounding beers, which ranged from hoppy beers to more mellow beers. Each one lived up to their name and it was easy to see why the manager, Mandy, recommended some of these as the best options from their wide selection. Mandy — you know your stuff! 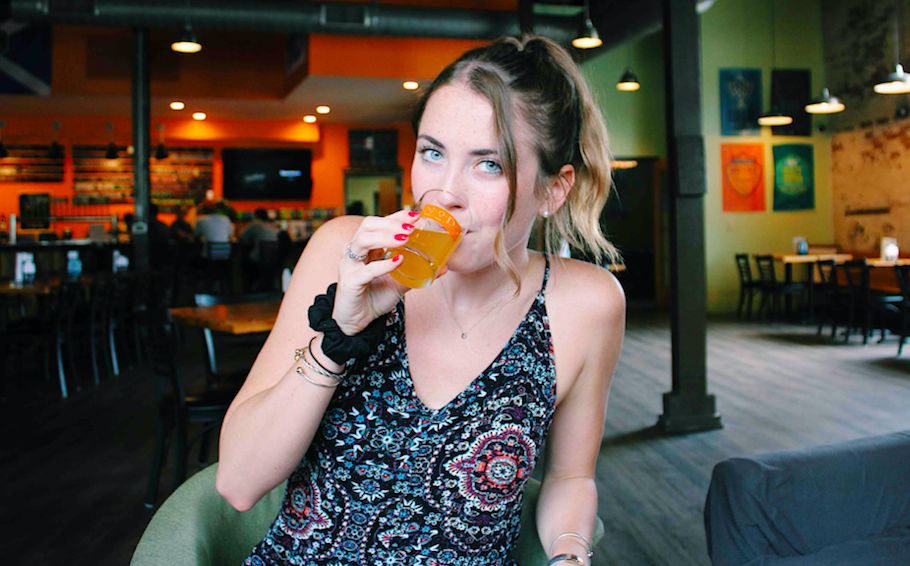 Not every brewery is a microbrewery. And not every brewery is the coziest place to stay. But the NODA Brewery was a unique brewery. Amazing artwork, comfortable couches to lounge on and relaxing music made this place a treasure to enjoy one (or four) beers. The staff was all incredibly informed and helpful when it came to choosing the right beer and they made the process of filling our flight fun and easy. If you appreciate a good drink, then the NODA Brewery is a MUST VISIT for anybody in Charlotte.

After getting a taste of a hip, cocktail focused lounge and a down to earth, game-watch sports bar, I knew it was going to be time to switch it up. So I began my search for the best Italian cuisine Charlotte had to offer. That’s when I stumbled upon my next stop — Aria. I knew that Aria was going to be a home run after my first sip of their handcrafted cocktail. Mixed right in front of us, the bartender assured us that this was the best she had to offer, and her creation lived up to the claim. As amazing as this first drink was, it was just a small taste of what Aria had to offer. 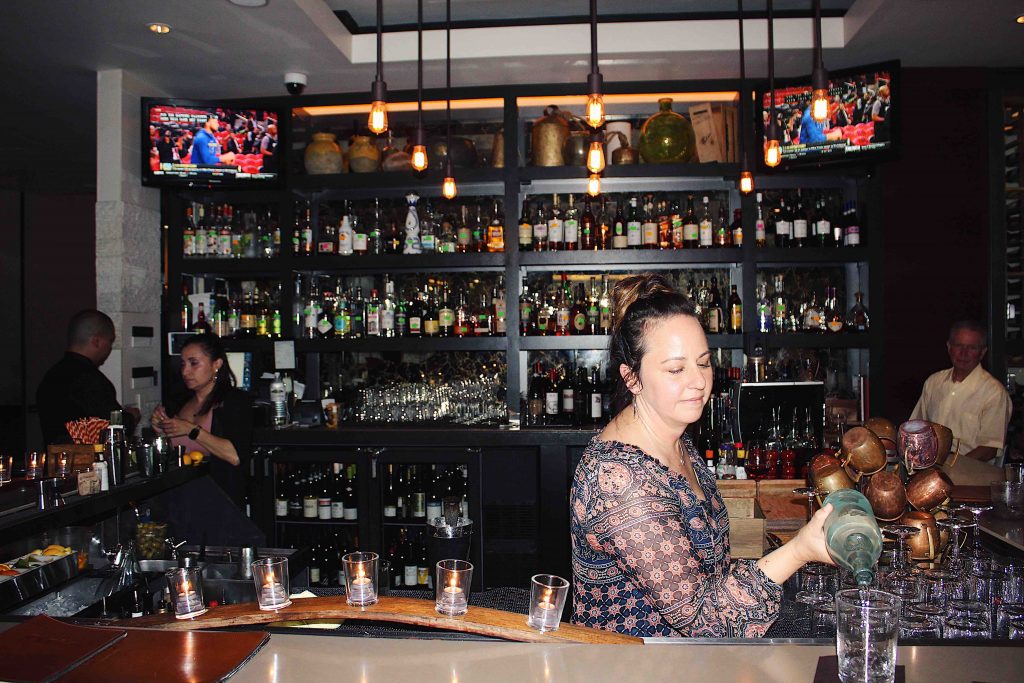 Our dining experience began when we sat down with the incredibly hospitable Bruce and Jill, who offered recommendations on their favorite Aria meals and drinks. “Thyme to Drink” a delicious creation of Tito’s vodka, house made thyme, squeezed orange and lemon juice, with burnt orange and “Skip the Wine” a mix of 1792 small batch bourbon whiskey, house made rosemary, and fresh orange and lemon juice, were the cocktails of choice. 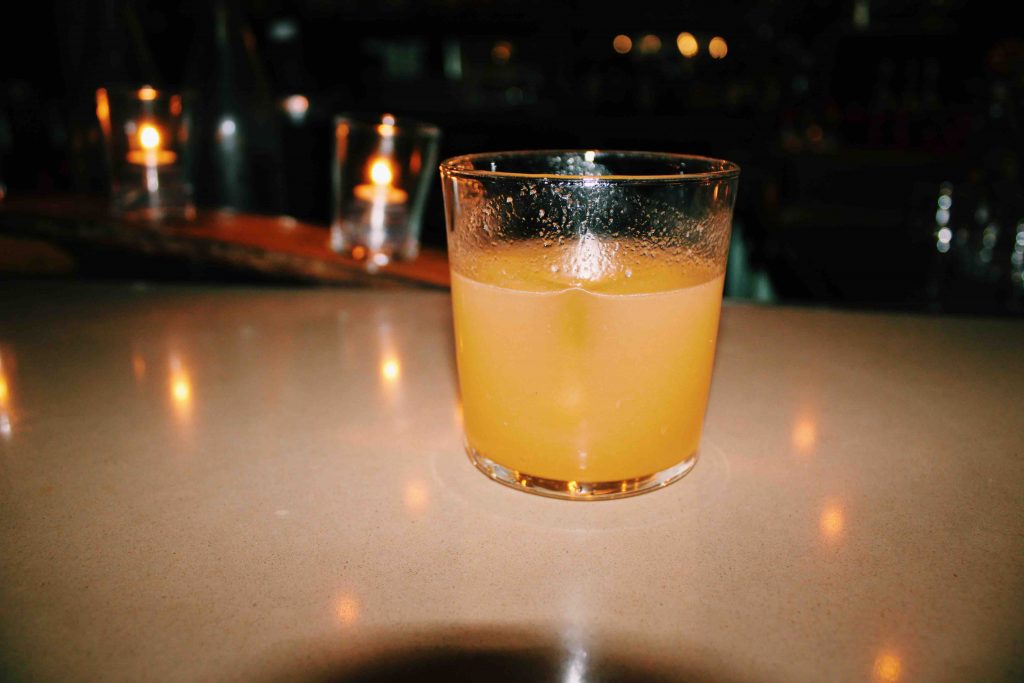 As for appetizers we started with a charcuterie board for 2, which could easily be snacked on by 4, which included some of the best meats, cheeses, flatbread and season mostarda that Charlotte had to offer. Getting the perfect bite is the name of the game when it comes to a charcuterie board, and Aria made it easy to get just that. 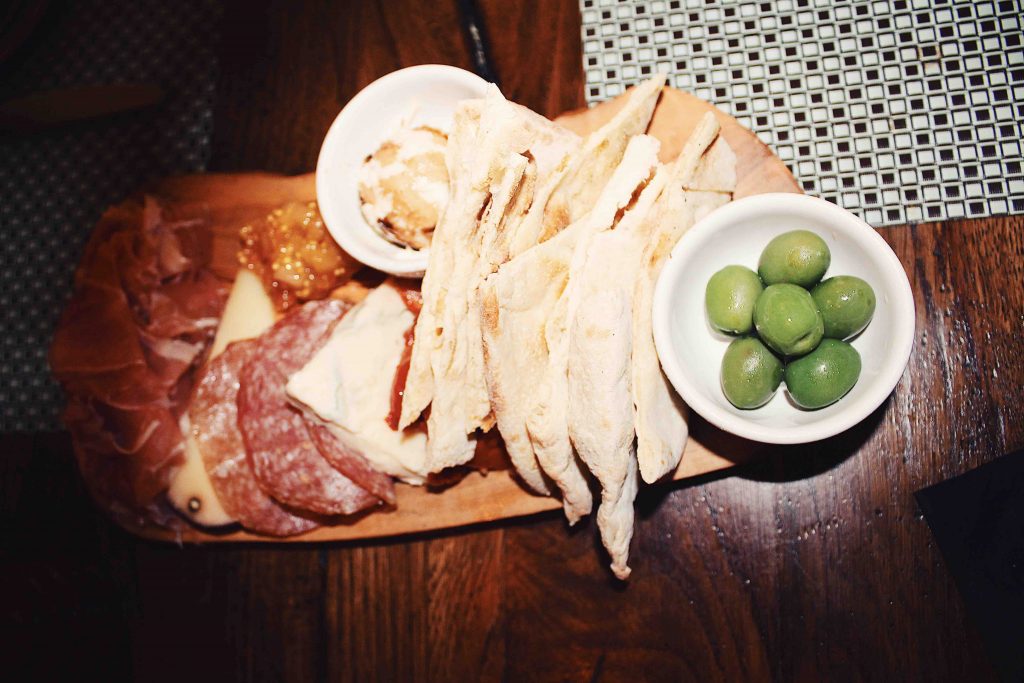 Next on the menu was an Italian classic…pizza! Cut into 6 perfect slices, this little treat was the perfect primer for the rest of the night. The crust was cooked to perfection and found the balance between crunchy and soft. 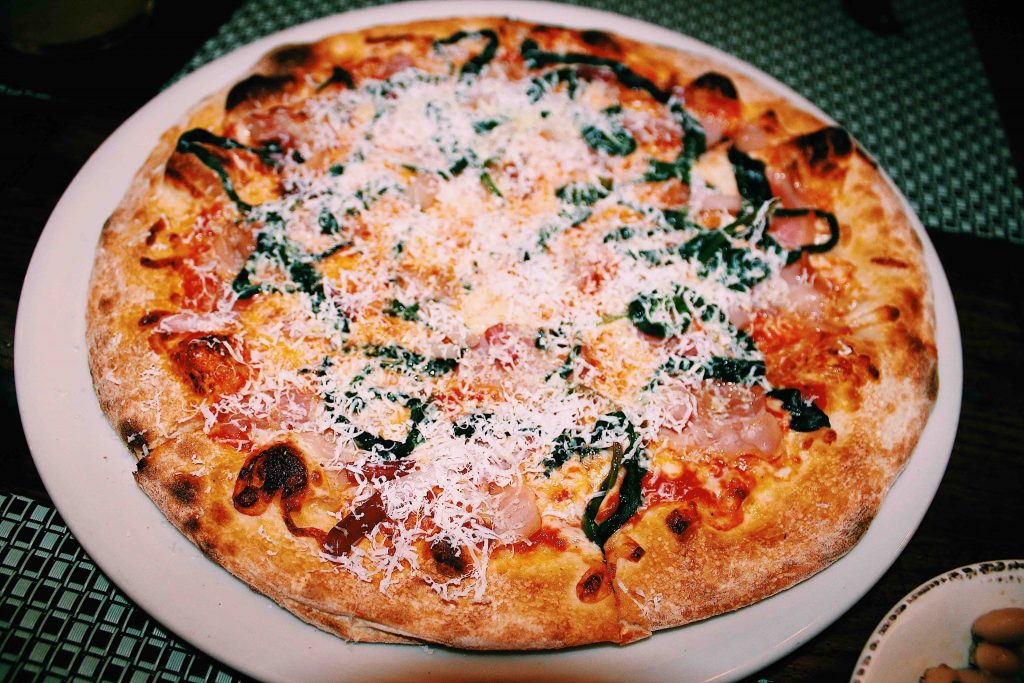 I found myself alternating between bites of the charcutiere, the pizza and the third dish on our appetizer menu — the chicken. Practically falling off the bone, Aria’s chicken was a powerhouse on its own and really shined when mixed together with some of our other tasty options. 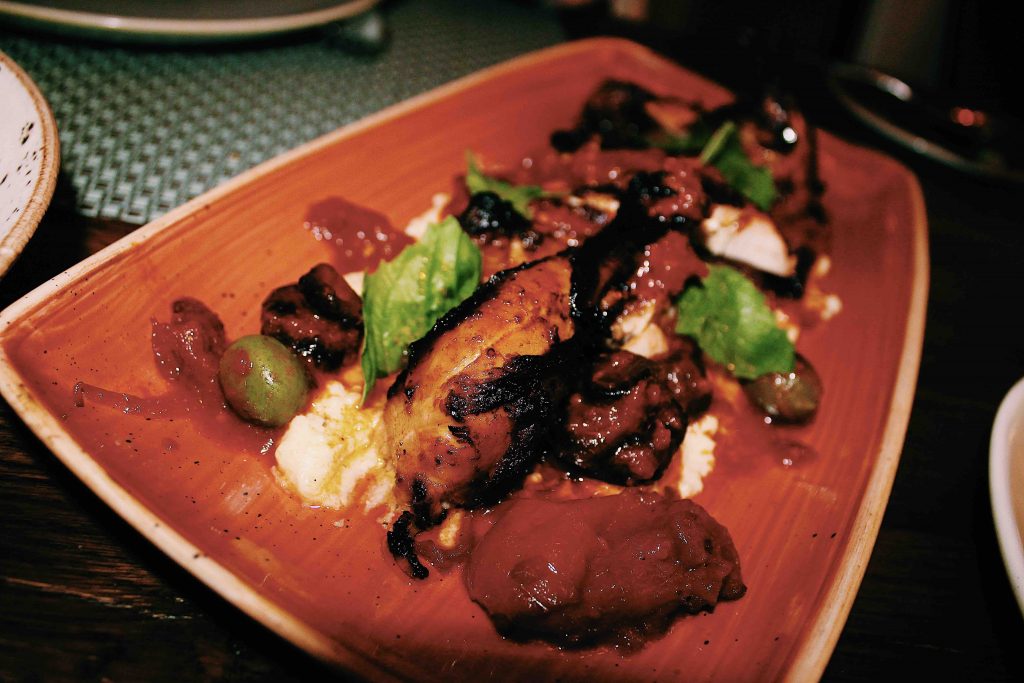 Not every Italian restaurant can do high quality seafood, so we were excited to try some of Aria’s seafood options to see how versatile their kitchen could be. We were brought 2 amazing seafood dishes — scallops and squid ink infused pasta. What a combination! They both went amazing with the red wine and each had their own flavors to offer. The Pan Roasted Nantucket Scallops came with roasted tomato risotto, crisp prosciutto, and basil, it was simply delectable. The squid infused pasta tasted just like the ocean and perfectly complemented the scallops. We weren’t expecting such a strong showing from the seafood side of Aria, but we were pleasantly surprised! 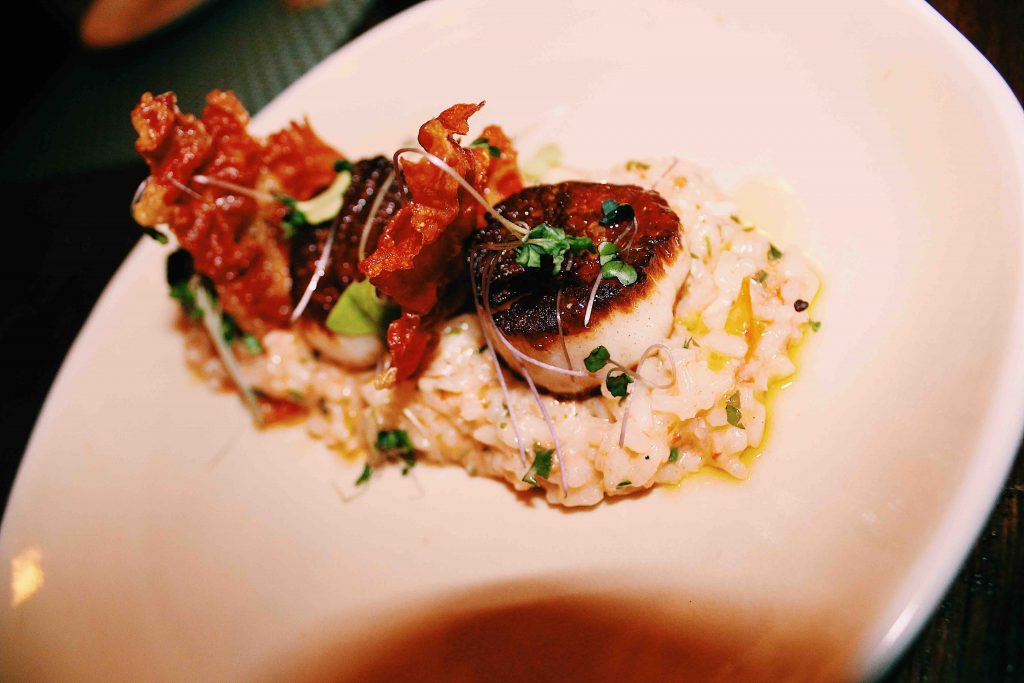 After filling our bellies with seafood and delicious Italian food that tasted like it came from the streets of Tuscany, it was time to satisfy our sweet tooth. We were determined to try it all, starting with the “Aria Tiramisu,” filled with espresso, lady fingers, and fresh mascarpone crema, and the “Gnam Gnam Gelato,” which came with 3 different flavored scoops and a pizzelle cookie. 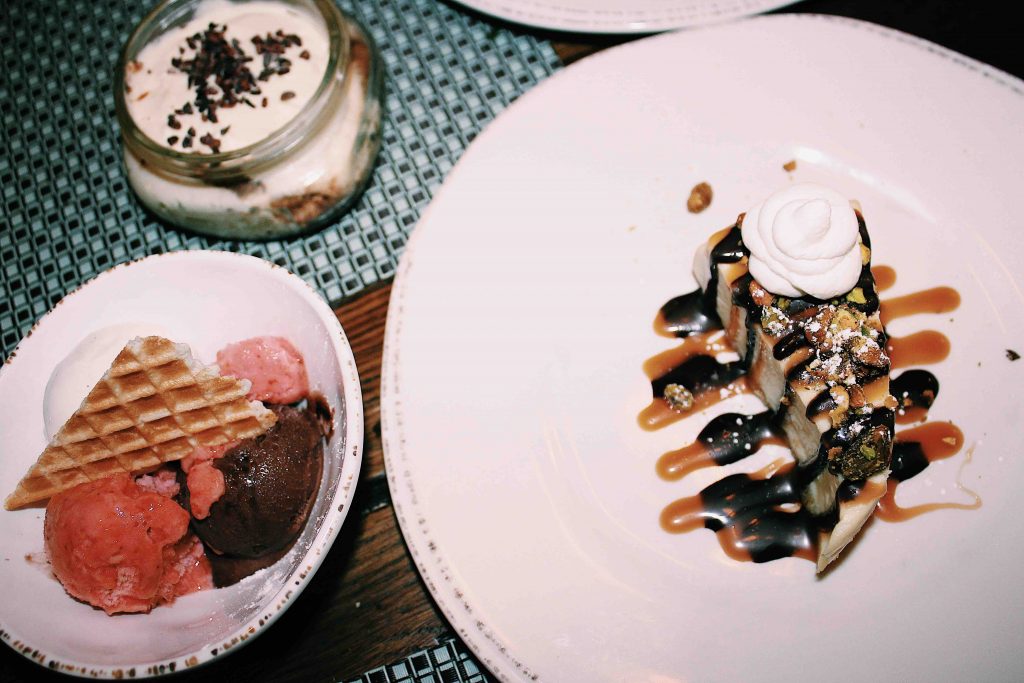 The first two desserts were so incredible we knew there could only be more greatness to come. Next up was the “Cassata” which was a beautiful uno alla volta orange ricotta cake, paired with gnam gnam basil gelato, the classic cannoli, and lastly the mascarpone cheesecake, with dark chocolate, salted caramel and pistachio… WOW. We really went all out, and it was a dessert spread so delicious it is simply impossible to feel guilty about it. Aria was an A+, 5 star, 10/10 experience from start to finish, which is why it is a strong “Must See Spot of Charlotte.”

If there was one stop on this trip that truly defined Charlotte, wrapped it all together and put an exclamation point on our visit, it was Fahrenheit. 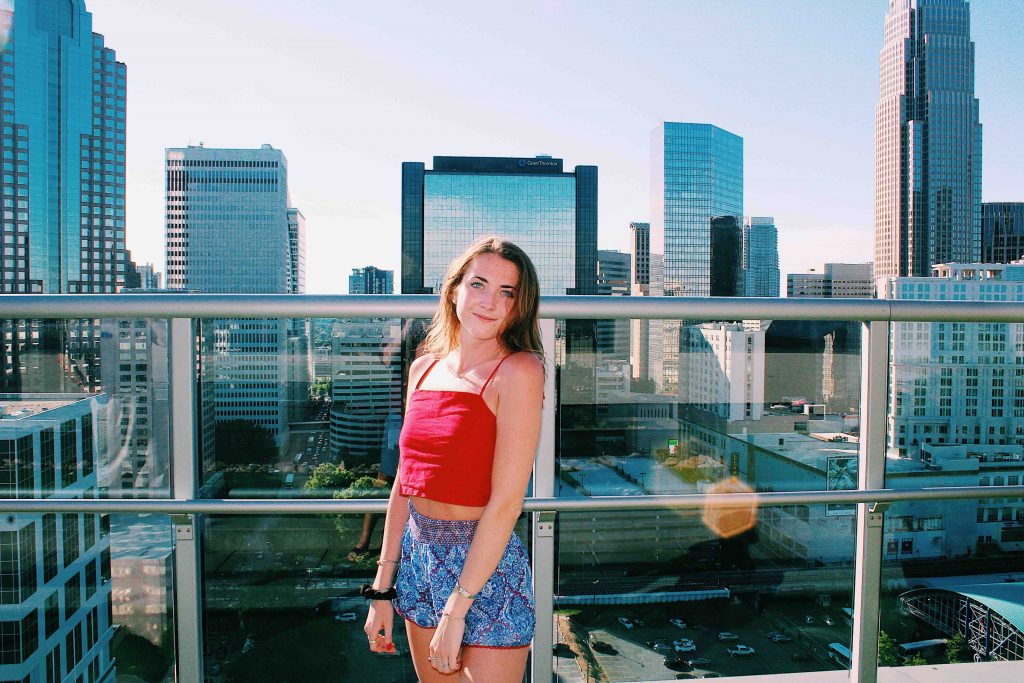 I have heard of the place long before I knew I would ever touch down in Charlotte, and it absolutely lived up to the hype. You may think that with a view this stunning, a location so prime, and a venue so Instagram-worthy, the food could slack a little bit. But you would be quite wrong. 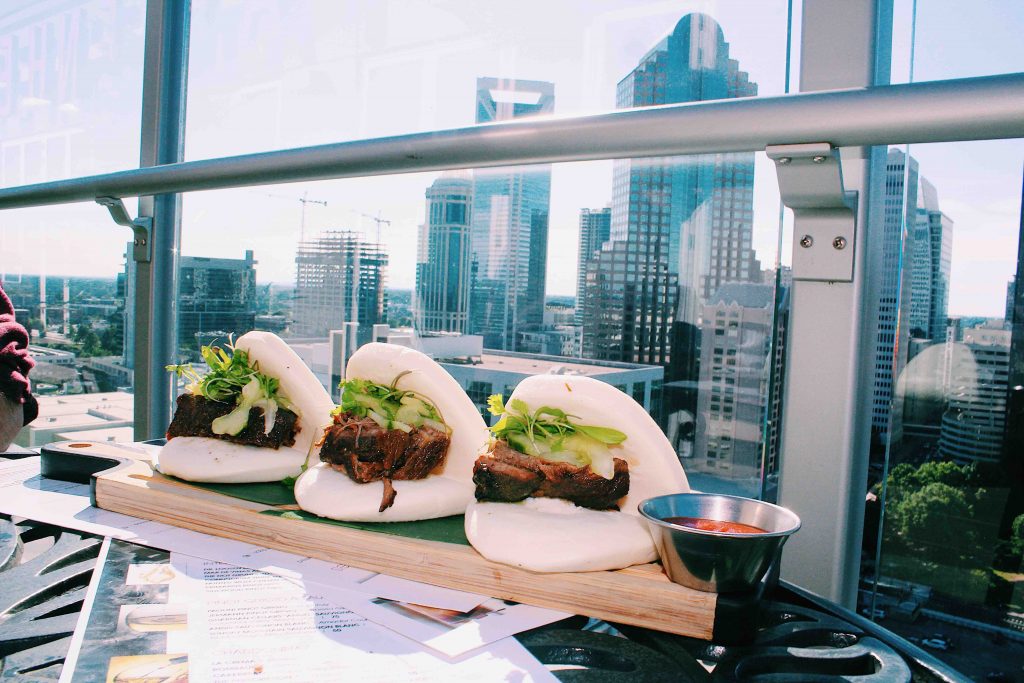 Fahrenheit isn’t just a pretty view. It’s a masterpiece of a restaurant that is anniversary, birthday, promotion, special occasion or treat-yo-self because you’re great worthy. Not only do you get to experience dining while overlooking the entire city of Charlotte, you get to experience some of the best food that the city has to offer. 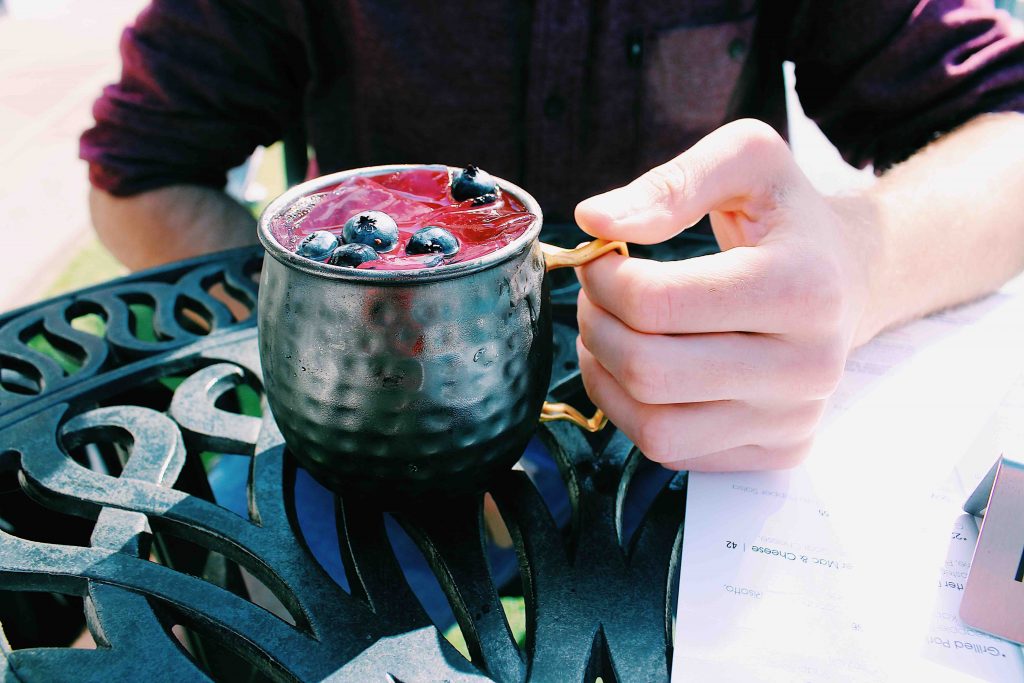 For lunch, we enjoyed something light — Brussels sprouts, shrimp and 2 of their best mules. What a treat! 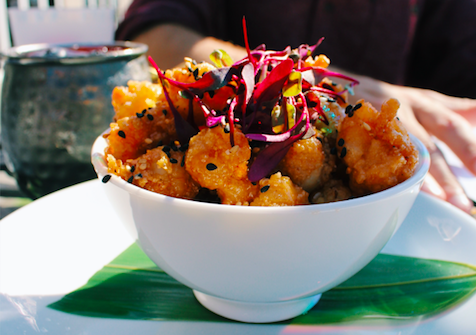 Everything was done right and made with taste in mind. We literally could have re-ordered the shrimp all day while we sipped on our cocktails. 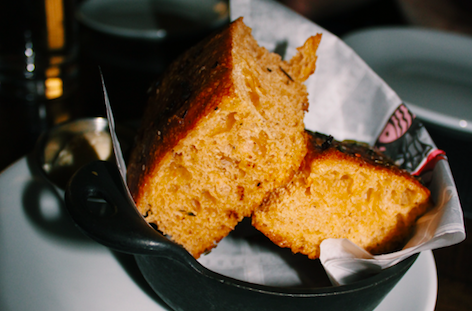 Everything was so good that we decided to eat at Fahrenheit twice in one day…seriously, it’s that good! For dinner, we experienced something truly special. After having just one bite of the bread, we knew that we were about to have one of the best meals we have had in our lives. 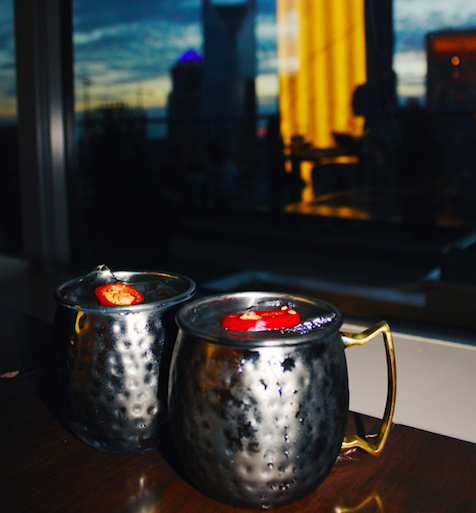 After re-upping on a few more cocktails, we settled on the lobster mac and cheese and their special for the week, a “wrecked fish.” 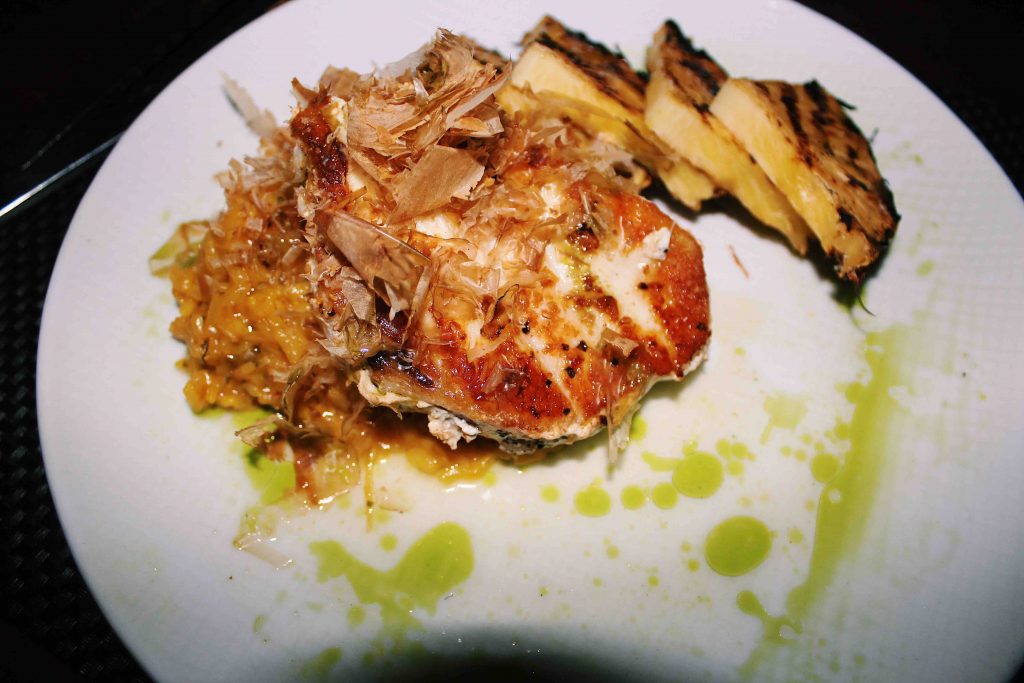 The lobster mac was a treat from the heavens. A blend of cheeses melted over freshly cooked rigatoni, topped with fresh caught lobster made this a can’t miss. Fahrenheit really had their seafood on point between the shrimp, lobster and specialty fish dishes. 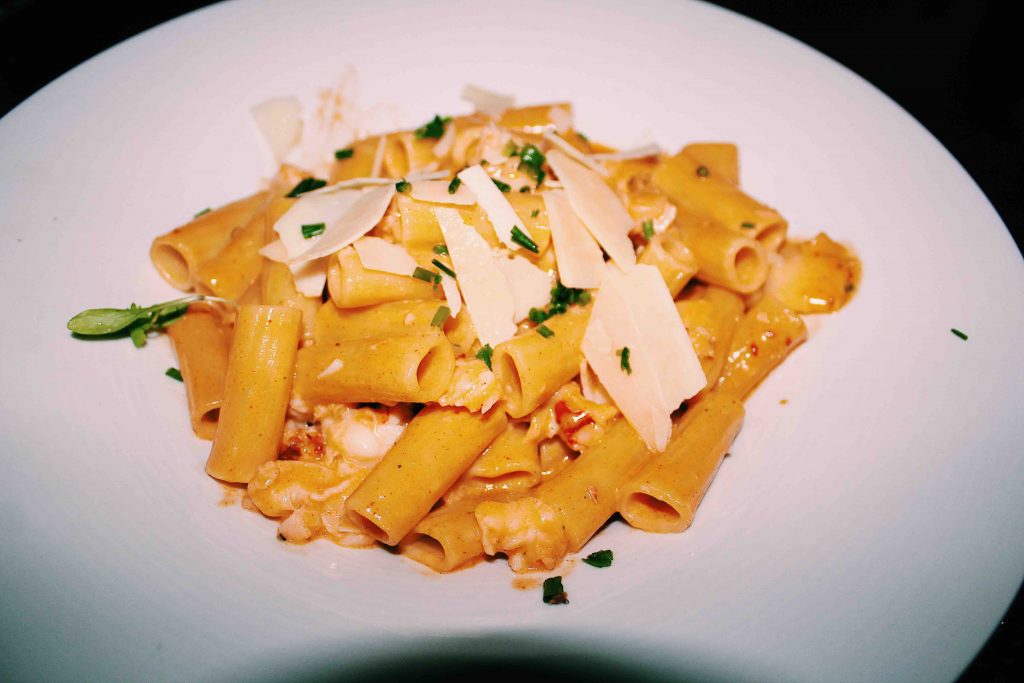 But it wasn’t just the food that was amazing — the service was superb! We had cordial chats with the manager, Dan, throughout our meals and our waiter was incredibly attentive. After seeing us let out audible signs “MMMMs” after eating our bread, he was sure to keep refilling the basket. Overall, it was safe to say that Fahrenheit wasn’t just a restaurant…it was an experience.

Our last stop in Charlotte was a complete 180 from Fahrenheit — we went from the rooftops of Charlotte to an underground speakeasy. After an excellent introduction from our waiter, who provided us some history of the city, we decided to kick it off with some drinks. After all, this was a speakeasy. 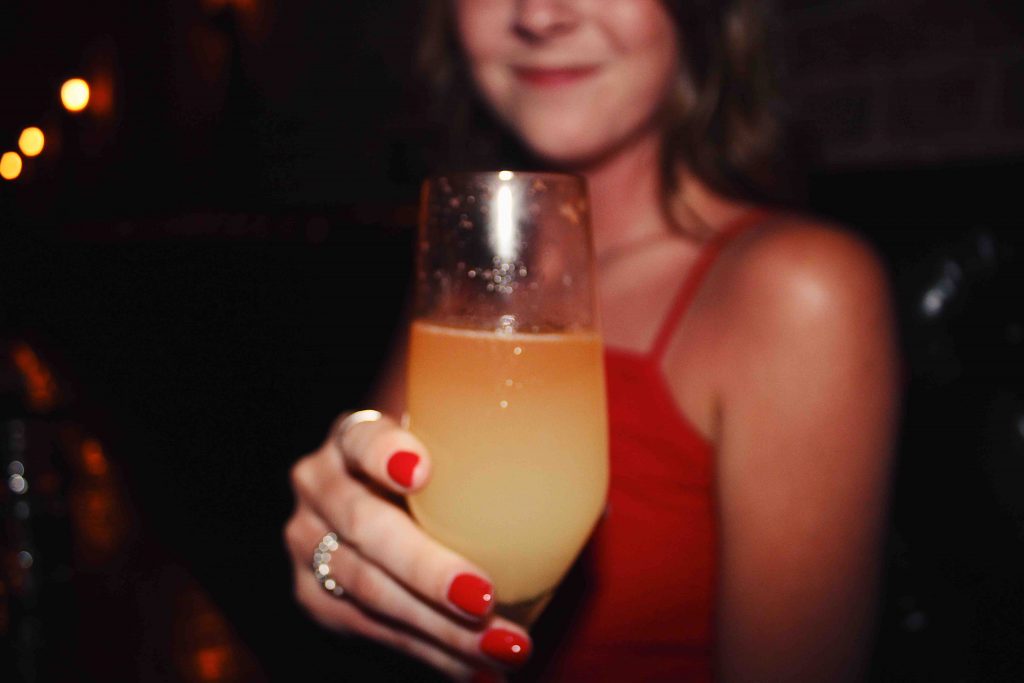 The East Village was a strong drink, modeling some New York cocktails — and they nailed it! Out of all of the whiskey based drinks that I’ve enjoyed in my life, this was one of my favorites. Easy to drink, but not too easy. 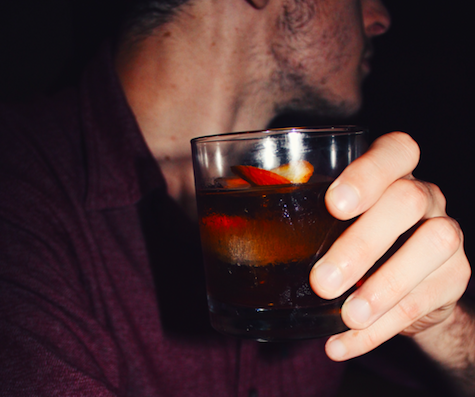 For food, we enjoyed a combination of some light appetizers that all played off of each other. Our waiter raved about the french fries and charcuterie, so we took him up on his recommendation and were NOT disappointed. We also decided to try out the duck pizza since it was something that we had never experienced. 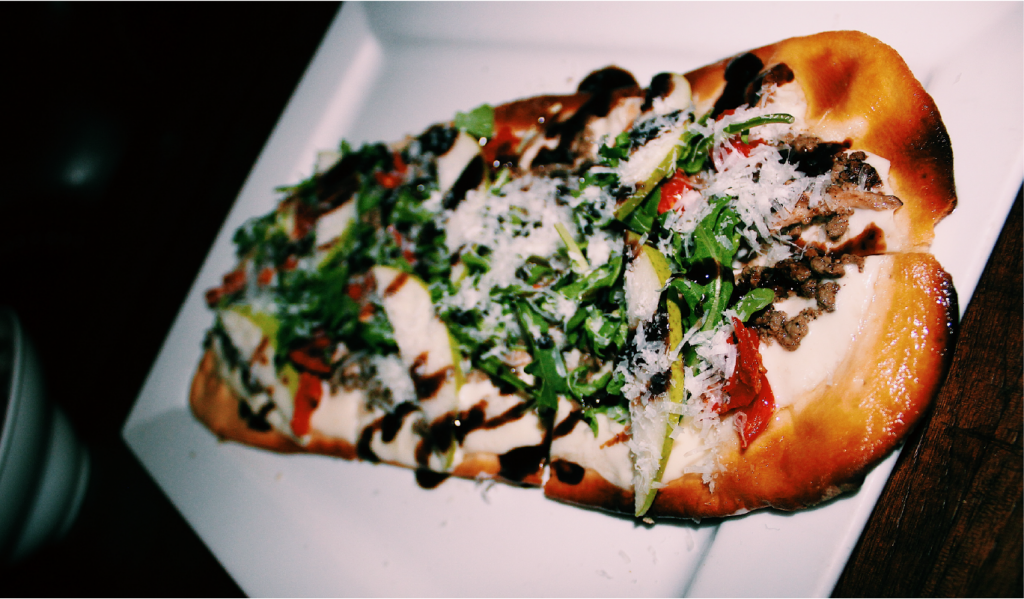 As good as the appetizers were, what really left us feeling full and satisfied was the dessert. Maybe it was because we had knocked down a few East Villages, or maybe it was just that good. We decided to order all 3 desserts that The Cellar had to offer. 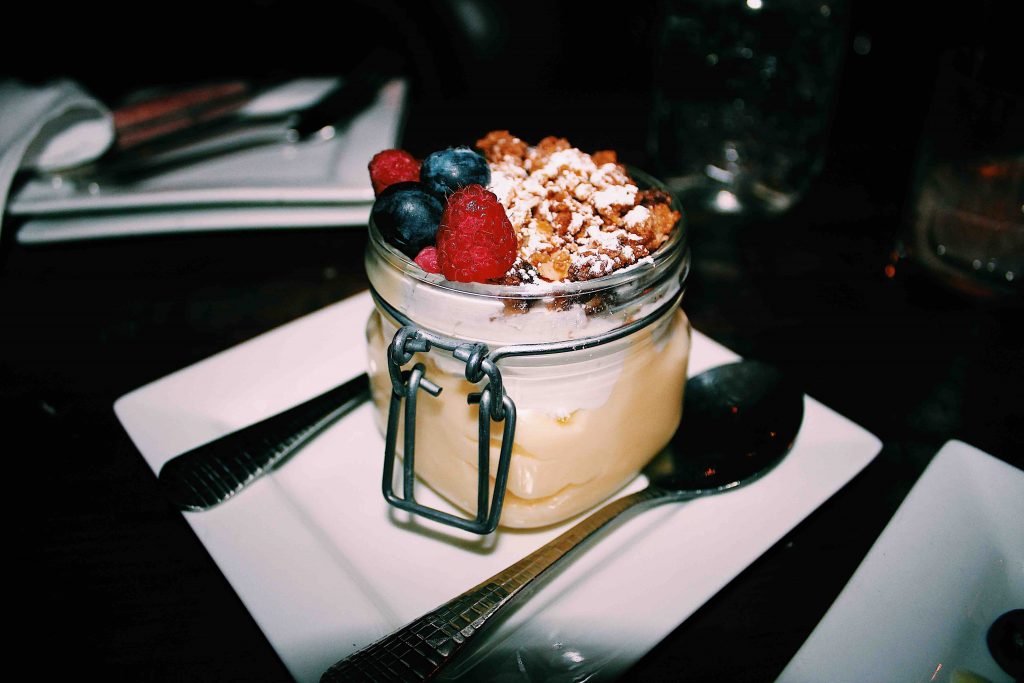 Out of the 3 options, the Lemon Curd, topped with apple cinnamon granola, house sweetened cream, and fresh berries, was a fantastic palette cleanser that left us prime to enjoy the next 2 sweet courses. 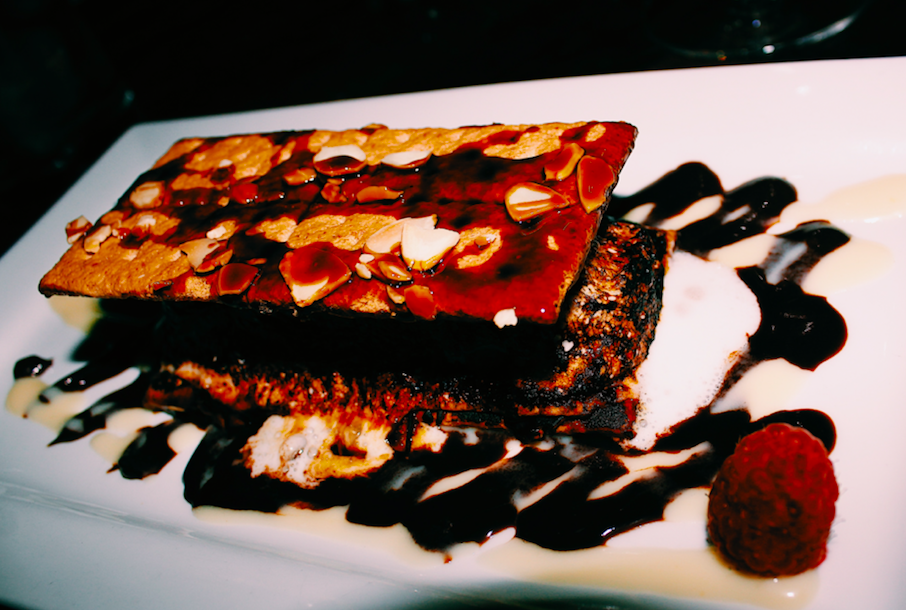 One being a HUGE “campfire almond s’more” made with dragon’s milk ganache, marshmallow puff, and of course a lovely graham cracker. 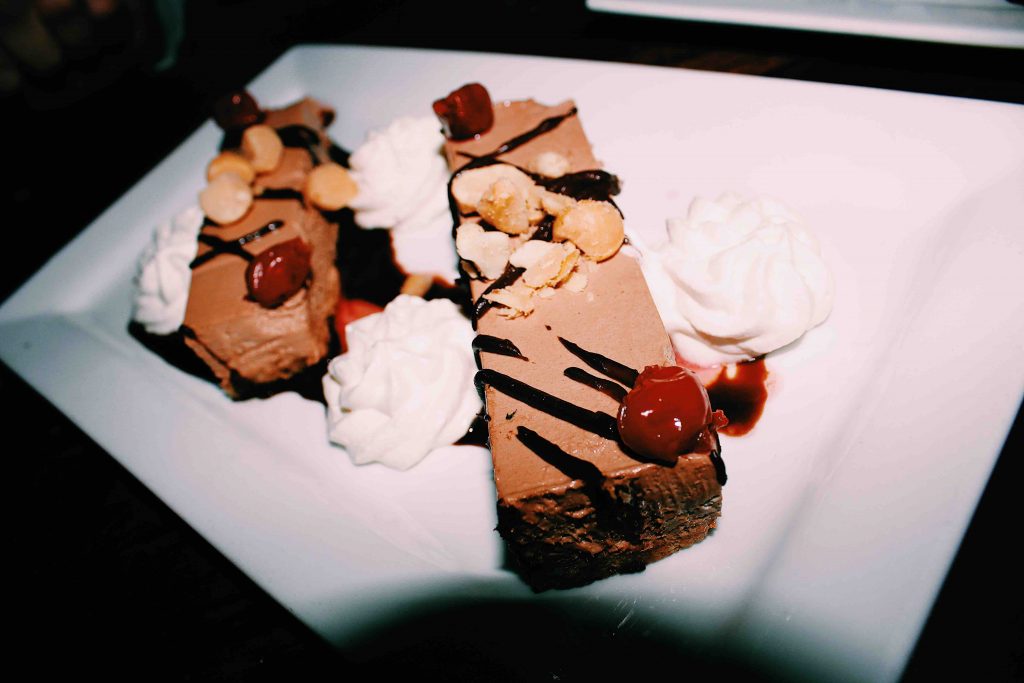 We saved the best for last with the nutella cheesecake… it was just wow. This decadent dessert was stout infused with nutella, candied cherries, and the smoothest of whipped cream.  At this point, we would consider ourselves pretty savvy when it comes to anything cheesecake related. So when we say that this cheesecake took the cake for the best cheesecake in Charlotte, know that we mean it. Different from a typical New York style cheesecake, this dessert packed all of the flavorful punches that a typical North East style cake did, but it had its own perks to it. A thinner bottom crust, more creamy filling and plenty of whipped cream, it was light and luscious. Overall, this was a great place to spend a few hours dining in Uptown Charlotte. A great place to take it easy, have some drinks and enjoy some quality food.