MORE QUESTIONS THAN ANSWERS FOR BRUINS 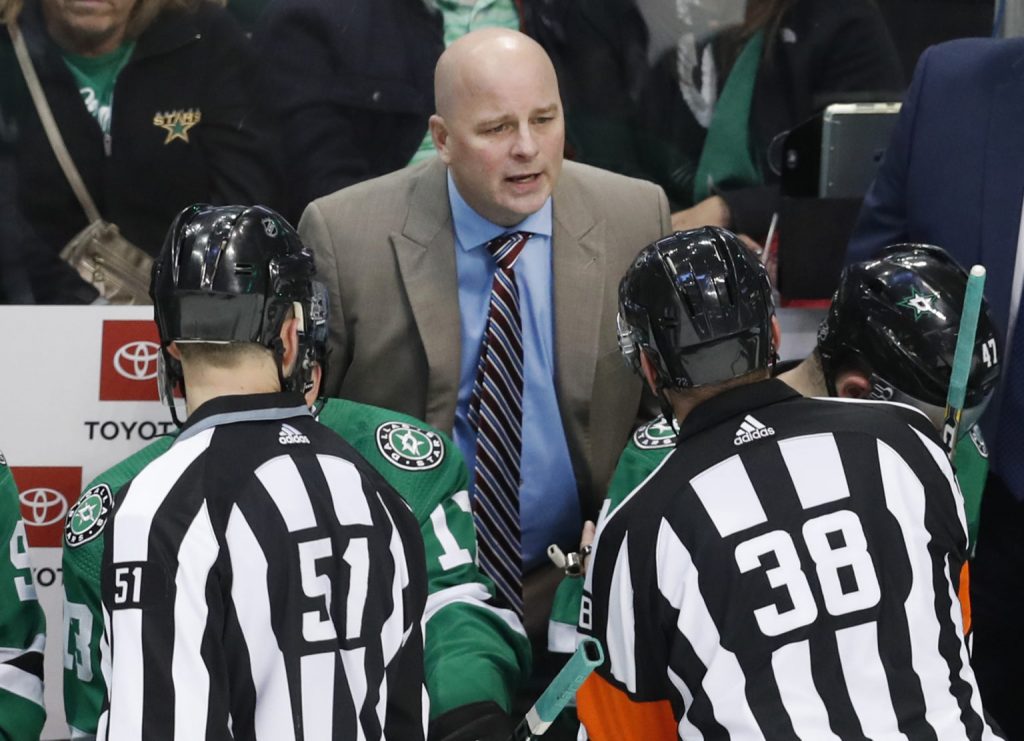 FILE – Dallas Stars head coach Jim Montgomery talks to officials during the second period of an NHL hockey game against the Arizona Coyotes in Dallas, Monday, Feb. 4, 2019. The Boston Bruins have hired Jim Montgomery as their new coach, giving the hockey lifer another chance at an NHL head-coaching job less than three years since he lost his first one. Recently extended general manager Don Sweeney announced the hire Friday, July 1, 2022. (AP Photo/LM Otero)

With a hot summer in full swing, Fourth of July barbecues in the past, and many finalizing their vacation plans, hockey fans in New England are wondering if this is going to be a cold offseason for the Boston Bruins. Saying there are a few question marks for the team as they head into next season is the understatement of the century. As a result, the devoted fanbase is feeling nerves galore as the franchise feels unstable. From ownership to the coaching staff, all the way down to the roster, nothing feels secure.

After a disappointing finish to this past season, and another early playoff exit under the leadership of GM Don Sweeney and team president Cam Neely, the organization decided to fire head coach Bruce Cassidy. In six seasons, Cassidy led the Bruins to a respectable 245-108-46 record with six playoff appearances. Boston went 36-37 in the postseason under Cassidy’s regime and appeared in the 2019 Stanley Cup Finals, where the team lost to the St. Louis Blues in seven games. He didn’t however, manage to escape the first or second rounds in each of the other five seasons. Neely, speaking shortly after the firing, said he felt it was time for a “new voice” in the locker room. That’s a common line heard often after a head coach is let go. In a surprising move to many, Sweeney not only kept his position, but was signed to a multi-year contract extension.

Under Cassidy, the Bruins were always an excellent regular season team. But outside of 2019, the team struggled mightily come playoff time. So the questions being asked were: Who was actually responsible for the lack of consistent playoff success? Was it the coach? Were the players on the ice just not producing? Or was it the man who constructs the roster who should be to blame? Ownership decided it was Cassidy, and not Sweeney, who many felt should have been the one on the chopping block. He was the one who was often criticized for his poor drafting results, his mostly mediocre free agent signings, and his subpar trades. He was the man who built the teams that more times than not, failed early and often when the playoff bell rang.

So with former Dallas Stars front man Jim Montgomery now in place as the new head coach, and Sweeney and Neely still sitting at the head of the decision making table, the Bruins push forward with a couple of huge weeks staring them right in the face. This past week the NHL draft wrapped up in Montreal. The Bruins were there, and they were active. Next week on July 13, free agency begins. Sweeney and Neely are on the hot seats, and they have to get both right. They can’t screw them up. They have to hope they drafted well, while also being smart with who they sign in upcoming free agency. The Bruins are at a critical juncture in the history of the storied franchise. Back in their younger years, Sweeney and Neely both played for the team they now run. Both were successful NHL players. During this busy month of July, they will anxiously await to see if they’ve found just that: successful NHL players. Which direction the organization heads in the next few years, is all dependent on the decisions they make.

At the draft this past week up in Canada, Sweeney and the Bruins went in with a plan. A simple one. Get talent in the middle of the ice. Lots of it. With the team’s first 3 picks, they chose all centers. At No. 54 overall, they selected Matthew Poitras, at number 117 overall they took Cole Spicer, and two picks later they went with their final center in the draft, Dans Locmelis. Their final three picks were compromised of two defensemen, and a goalie, all whom will likely be buried in the minors for years to come. But the offensive talent drafted is something Sweeney is counting on to pan out. We have no idea if any will make significant impacts for future Bruins teams. Sweeney’s track record doesn’t suggest they will.

But why so heavy on one position? They clearly don’t think there is much depth at center, and they know they need to start planning for the future. Captain, centerman, and future first ballot Hall of Famer Patrice Bergeron has yet to commit to a return to the team. Reports are he will come back for at least one more year, but nothing is set in stone. His fellow top linesman, Brad Marchand, is recovering from major surgery on both of his hips. He isn’t expected back to full game action until at least Thanksgiving. Perhaps the team’s best player, defenseman Charlie McAvoy, is also rehabbing an injury. McAvoy had shoulder surgery in the beginning of June, and he also isn’t expected back in the lineup until early December. Fellow defensemen Mike Reilly and Matt Grzelyck also had injuries that required surgery and their recovery time leaves them questionable for the start of the regular
season. Questions are everywhere, and answers are nowhere to be found.

When healthy, the Bruins have perhaps the best 1-2 punch in the league on D when McAvoy is paired with mid- season acquisition Eric Lindholm. The team also has perhaps the most dangerous offensive line in the NHL, with Bergeron, Marchand, and David Pastrnak. But will McAvoy come back fully healthy when he finally does return before Christmas? Will Marchand be the same dangerous goal scorer we’ve come to know and love after a serious hip procedure? And perhaps the glue to the entire equation, is the leader of the team, Bergeron. Will he even be wearing his legendary No. 37 when the team kicks off its campaign on October 12 in Washington vs. the Capitals? These questions with unknown answers are only the tip of the iceberg for the Bruins front office. There are many more minor ones that also need solutions.

Starting at the center position. Assuming Bergeron is back, who is the second line center? Is either Charlie Coyle or Erik Haula ready and able to assume that role? Is there any hope that David Krejci will make a triumphant return to Causeway Street and fill that position? Did they draft any hidden gems this week to be the future there? Or did Sweeney miss again? Can winger Jake Debrusk be counted on to produce on one of the top lines? Does his trade requests, and rescinding of those requests signal a guy who just isn’t reliable? Who else will Sweeney add via free agency to supplant the secondary scoring drought, that has plagued this Bruins team time and time again in the playoffs? Who will the team decide is the future in net? Is young gun Jeremy Swayman really ready to fully take the reins? If so, can Sweeney find a trade partner for Linus Ullmark and his hefty contract? Assuming health, McAvoy and Lindholm should be just fine when it comes to leading the blue liners in keeping the puck out of the net. And Grezlyck and Reilly are nice pieces when they get healthy, while Brando Carlo is a solid young veteran who will provide stability on D if he can keep out of concussion protocol.

There are a million more questions than answers when it comes to figuring out what product Neely and Sweeney plan on putting on the ice for Montgomery this fall. And the bigger picture might be even more uncertain. What direction is this franchise headed? Are they trying for yet another “one more kick at the can” season? Are they happy to just make the playoffs again, and be content with another first or second round knockout? Or are they considering trading some of the older veterans to get younger, and commit to the dreaded “rebuild?” The picture is being painted as we speak, and Bruins fans can only hope that Sweeney gets this one right.

But file this under fact not opinion: It’s highly unlikely Neely would have brought his GM back only to tear this thing down and start from the beginning. Not simply because that would be a painful reality for their fanbase, but also because they could mean both their jobs.