Mets Bet Could Have Gone Better

Few things inflict as much shame on a New England sport’s fan as being forced to don any New York sports team’s regalia. Anything sartorial associated with a New York franchise—touching any part of the body—burns through our skin into our blood, soaking the core of our being with ignominy that cannot be washed.

In my case, it was a bet that brought me to this lowliest of conditions.

Now, I’ve been known to dawdle with sports gambling on occasion. While a far cry from a degenerate gambler, the thrill of the bet is hard-wired in humans, and its allure is undeniable. When something is wagered, the stakes are raised, and we become more invested with the outcome. The adrenaline spikes, and it becomes fun to watch.

My wife and family recently stayed in my uncle’s house on Provincetown with my cousin, her husband and their family for a weekend. In total, there were nine of us—four adults, four teenagers, and an infant—a full house, indeed (rimshot, please).

Our sons are both teenagers, meaning without access to a PS4 they would’ve been hospitalized with withdrawal symptoms, so they brought the PS4 and with it a bevy of games, including MLB ® The Show 19 ™ (no lawsuits here).

As my cousin’s husband—who we will refer to as “The Captain”—and I indulged in a few Bud Lights, the MLB ® video game peaked our interest. The Captain, who follows The New York Mets with the same fervor that I follow the Red Sox, suggested that we face off for a game with him as the 2019 Mets and me, obviously, the suck-bag 2019 Red Sox.

Let’s just say that video games have come quite a ways since I played Sega hockey in my frat house in the mid-90s. Not only did the game have the exact line-ups that are playing in real-time, the graphics made it feel like I was on the field.

With a little more Bud Light and a little more bravado, the intensity of the games amplified. As ardent fans, The Captain and I brought our game jerseys for our respective teams (What else would you wear when going out in Provincetown but a baseball jersey?). Then I came up with the idea of the bet. 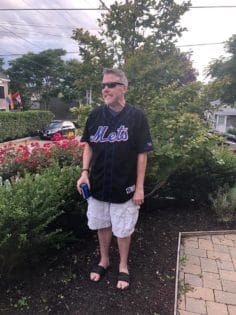 “Okay, Captain. This time it counts,” I said, thieving the 2003 MLB ® All-Star Game slogan from then-Commissioner Bud Selig’s misguided idea to give the winner home field advantage in the World Series. “The loser of our next game has to wear the winner’s jersey out tonight.”

“You’re on,” The Captain, grinning after winning Game 1, where I pitched Chris Sale against Jacob deGrom, in a squeaker.

In Game 2, the game that counted, he started Noah Syndergaard against the Red Sox $30 million man David Price.

And that should about sum it up for you.

Price surrendered a three-run bomb to Pete Alonso in the second inning, and The Mets never looked back. I was forced to go to the Red Sox suck-bag bullpen in the fifth, and Matt Barnes and Heath Hembree were unsurprisingly terrible—as I said, the game is eerily real—and The Captain’s Mets won a 10-2 blowout.

Never one to welch on a bet, I put on the jersey, and we headed out with our families for dinner in P-town.

And let me tell you, Hester Prynne had nothing on me. Instead of one degrading red letter stamped to my chest, I wore four bright-orange letters that perpetually reminded me of the indignity the Red Sox suffered at hands of New York Mets in 1986.

I wore Roger Clemens coming out the Game 6 with a fucking blister. I wore Calvin Schiraldi needing one strike with a two-run lead in the tenth. I wore Bob Stanley throwing a pitch past Rich Gedman. I wore Keith Hernandez smoking a cigarette in the locker room. I wore the ball going through Bill Buckner’s legs as Ray Knight jumped down the third-base line. I wore Wade Boggs crying in the dugout. I wore the champagne being moved out of the Red Sox locker room.

At the end of the night, I took off the jersey and immediately showered—a futile gesture seeing my soul had been soiled. Not only did The Captain win the bet, but his Mets can still make the postseason.

That son of a bitch.