Dear Chaim Bloom: Please do something, anything.

When New Englanders have finally had enough of snow and cold, the one thing that keeps us going is the promise of a new season of Red Sox baseball.

There’s something special about Boston in the spring and summer when baseball is being played. Some day soon we can hopefully get back to Fenway to drink some overpriced Bud Light and get an ice cream helmet (and don’t pretend like you’re too old to be eating ice cream out of a Sox helmet).

As Red Sox fans, we all know our beloved team is in a deep rebuild. A rebuild where we expect our Chief Baseball Officer to be active during the Winter meetings and the hot stove season.

Bloom has done nothing of note so far this offseason and we need him to step up. He went out and signed Hunter Renfroe. Great. Renfroe is a solid depth guy for the outfield. But the Sox don’t need depth in the outfield, they need pitchers. Their starting pitchers are embarrassing. The best ERA for a starting pitcher last year was Nate Eovaldi with a 3.72. Easy solution: Go after the outspoken Trevor Bauer who had a league leading 1.73 ERA. They need to be in the hunt for the ace, but as of right now, we have heard nothing, not even a whisper about him coming to Boston. 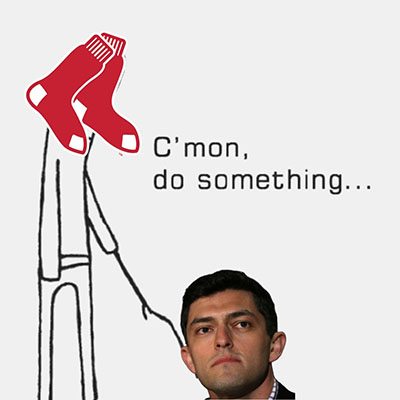 If you didn’t notice last year, the bullpen was basically throwing batting practice to opposing batters. A solid reliever who can show some level of consistency would benefit the team greatly… *cough cough* Liam Hendriks. The past two years have been good to the Oakland closer. He’s averaging a 1.79 ERA and 19.5 saves. The Sox need someone who can capitalize and finish out wins and cue up Love That Dirty Water blasting over the speakers.

What about the gap at second? They are still holding on to Dustin Pedroia for some reason. Maybe try to transition Pedroia to a coach and get someone like DJ LeMahieu. Bloom can flip the script and steal a great second baseman from the Yankees.

With all these stars available and a limited budget, it’s unlikely that Bloom sign all of them, but can he get one or two stars? Can they just compete? Ownership brought Bloom in after seeing what he was able to do with the Rays and a limited budget. They gave him a blank check, some talented pieces, and Sox fans have seen nothing to give them confidence outside of bringing back manager Alex Cora. But now is the time to bring some on-field talent into the fold.